End Games Part I: There Aren’t Always Enough Fish in the Sea 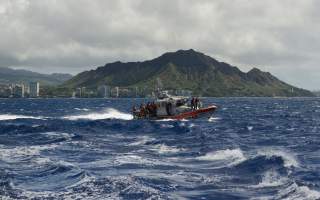 The board game “Fleet” (Eagle-Gryphon Games) is a simple engine-building game with auction mechanics.  Each player starts with limited financial resources that are then used to generate capacity for more resources by purchasing fishing licenses and hiring captains.  The game ends when there are either no more fishing licenses to distribute or no more tokens of fish to extract from the ocean.  Whomever has the most points from licenses, ships and fish, wins.  The lost message in the end game is that, contrary to the adage, there are not plenty of fish in the sea.  Fleet demonstrates the issue global overfishing, the potential for conflict over diminishing resources, and how non-state navies may have the answer to this security issue.

While nuclear weapons, cyberwarfare, conventional weapons and terrorisms are rightfully significant national security issues, food security – particularly with regard to marine protein – left unabated potentially poses an equally catastrophic threat to regional and global populations.  World per capita fish consumption is at historically high levels according to the 2016 “State of World Fisheries and Agriculture” report of the Food and Agriculture Organization of the United Nations (FAO).   Fish consumption has doubled in the past fifty years.  The impact of this growth is further amplified by population growth.  The world’s population was five billion less than thirty years ago.  In the next decade, it will reach eight billion.  In short, a larger population will create an even higher demand for marine protein.  Nor is it just human consumption that has increased.  Fifteen to twenty percent of marine protein is converted to fishmeal for livestock.

Food consumption has affected the availability of marine protein.  Paul Watson, founder of the Sea Shepherd Conservation Society, was raised in the fishing village of St. Andrews, New Brunswick, recalls lobster traps being lined up a half mile down roads where they are now largely absent.  The local industry has been replaced by other sources.  “Mussels were considered dirty when I was a kid,” he recalls in one of his homes.  This change can be seen in other regions on the east coast of North America.  The small village of Port Clyde, Maine may be better known as the home of the Marshall Point Lighthouse that Tom Hanks’ character runs to in the movie Forrest Gump or for artists such as the Wyeth family.  Although a dozen or so lobster boats still get underway in the early morning hours nearly every day, they have faced a shortage of the once-plentiful herring which are used as bait in lobster traps.  Further down the coast, oyster population in the Chesapeake Bay is at one percent of its historical levels.  Where more than two thousand skipjacks – the sailboats of watermen used for oyster dredging – once dominated the Bay, today approximately only two dozen remain active.  Further out, the once-rich Grand Banks struggles to yield fish; in 1992 the Canadian government banned fishing there when cod collapsed.  In 2015, the National Oceanographic and Atmospheric Administration placed restrictions on cod fishing in the Gulf of Maine.

These local accounts are part of global trends.  According to the World Wildlife Fund, “more than 85 percent of the world's fisheries have been pushed to or beyond their biological limits and are in need of strict management plans to restore them.”  FAO monitors 600 marine fish stocks and has reported that: “3% are underexploited 20% are moderately exploited 52% are fully exploited 17% are overexploited 7% are depleted.”  One of the most dire reports came a decade ago from Dr. Boris Worm at Canada’s Dalhousie University in which he predicted that by 2048, there would be no more commercial fishing if no measures were taken to replenish stock.

The collapse of some fish and the decreased availability of others has an immediate economic impact on consumers who pay more for seafood.  In addition, consumers are required to turn to previously underfished stocks.  According to Watson, “as soon as we overfish one species, we target a previously uncommercial species and make them commercial.  We adapt to diminishment.” One example he gave in a recent interview was pollock.  “They’re tasteless and now they’ve developed a way of turning it into artificial crab. They add a chemical smell and a chemical dye.”  Another example is the intentionally misnamed Chilean Sea Bass which is in actuality the less marketable toothfish.

The worst damage to fishing may be the illegal fishing trawlers.  Watson, who has spent forty years with Sea Shepherd but spent a decade before that on the oceans, says that the biggest violators are Russia, China, Spain and Japan and estimates some forty percent of seafood is caught illegally.  Scientists note the number is lower (13 to 31 percent) but no less significant. Other reports of Illegal, Unreported, and Unregulated (IUU) fishing has varied based on regions.  In the U.S., for example, 20 to 32 percent of imported wild-caught seafood is illegal; in other regions, it is as high as 50 percent.  Globally, illegal fishing is an annual $23 billion industry which will likely rise as fish stock diminishes and consumer demand rises.

Increased competition for marine protein is already manifesting in the South China Sea which may be on the verge of collapse.  Given China’s population it is expected that it is the country that catches and consumes the most fish, but it has taken unexpected action against illegal fishing.  For example, earlier this year Sea Shepherd’s Operation DRIFTNET documented and chased the Chinese Fu Yuan Yu fleet.  As a result, the ships were required to remain in port, the captains were suspended and each received a reported $300,000 fine.

Not all incidents are as benign.  Incidents between fishing fleets and national coast guard vessels are increasing in the Far East as nations claiming various territorial rights have rammed other fishing vessels or fired upon one another.  Recently a South Korean Coast Guard ship fired at a Chinese fishing vessel.

While it is possible that diplomatic negotiations may deescalate potential incidents, it is unlikely.  States will respond to hungry citizens before implementing change that may ensure future replenishment of resources, particularly regarding marine protein.  One of Paul Watson’s oft-repeated adages is, “if the oceans die, we die.”   It is a truism that if marine life is depleted beyond recover, the cascade effect will be detrimental but competition for diminishing resources may well spark a broader conflict before that occurs.

Part II: All Roads and Shipping Lanes Lead to…

Claude Berube has taught in the Political Science and History Departments at the Naval Academy.  He has co-authored three non-fiction books and writes the Connor Stark novels (Naval Institute Press.)  The views expressed are his own and not those of the Naval Academy or Navy. @cgberube