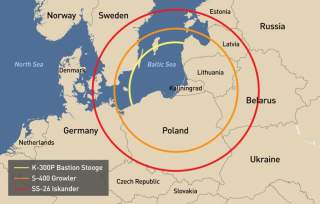 On the cold, cloudy afternoon of March 18th, 2018, the 22nd Marine Expeditionary Unit (MEU) and its Amphibious Readiness Group steamed through the Baltic Sea about 100 miles south of the Swedish island of Gotland, just west of Lithuania and Latvia. With its full squadron of three amphibious assault ships, including the USS Bataan Landing Helicopter Dock, and three Arleigh Burke-class destroyers, this impressive US military presence in the Baltic Sea was unprecedented. In response to unusual Russian military activity near Estonia, including the presence of ‘little green men’ in the border town of Narva, the new White House administration was determined to send a message to Moscow.

Two US Marine Corps F-35Bs, flown by call sign Yukon and his wingman Zeus, surged off the deck of the USS Bataan to conduct a combat air patrol (CAP) to reinforce the NATO presence in the area. Banking south, Yukon heard the NATO E-3 Sentry Airborne Early Warning and Control (AWACs) operator Showboat say through his thick Dutch accent, “Yukon, Showboat, you have a pop-up group of two Bogeys, Bullseye 207 degrees for 150 kilometers, 1,300 meters.”

“Copy, Showboat. Intercepting,” Yukon responded as he throttled his jet up to Mach 1.6. Another aggressive Russian flyby, he thought.

About four minutes later, Yukon and Zeus had positioned their aircraft about 250 feet behind the two Su-30SM Flanker-C bandits. But unlike previous intercepts of Russian fighter over Baltic Sea, the Su-30s were clearly armed with more than the typical, short range Archer (R-73) air-to-air missiles.

“Zeus, any idea what they’re carrying?” Yukon asked his wingman.

“Negative, but they’re not playing around today,” she responded.

“Copy. Take a closer look for me.”

“Roger,” Zeus responded. She slowly began to creep her aircraft closer to the Su-30 on the left.

“Showboat, Yukon, tally-ho on two Flanker-Cs. We think…” Yukon’s voice trailed off as he watched a disaster unfold in an instant.

As Zeus approached the bandits, one of the Su-30s tried to barrel-roll over her F-35B. But as Zeus held steady 100 feet from the Flankers, the Su-30 pilot misjudged the maneuver, and slammed the Russian jet into the right wing of Zeus’ F-35B. The wing snapped off, sending Zeus spinning, while the Su-30 pitched over into a nosedive.

In response to the chaos, the remaining Su-30 banked right, and bugged out. When Yukon looked to his left, he felt relief and horror at what he saw.

He could see Zeus’ parachute. But… there was no sign of the Russian pilot.

Although the aforementioned vignette is fictional, it captures the increasingly worrisome military implications of Russia’s posture in Kaliningrad. The presence of Russian ground, naval, and air forces in Kaliningrad is not new, but Russia has essentially transformed the tiny area into a major “pop-up” Anti-Access/Area-Denial (A2/AD) zone from what had been a Cold War-era Soviet outpost. Despite traditionally being associated with the Asia-Pacific or even the Persian Gulf, Russia’s deployments in Kaliningrad reflect the potential for the emergence of localized A2/AD zones in Europe. Not only is A2/AD now a critical component in European security dynamics, but it is also a global phenomenon that has truly ‘broken out’ of the Pacific’s First Island Chain. With NATO’s eyes on the defense of its Baltic members and a growing view that Poland is NATO’s new center of gravity in the East, a Kaliningrad A2/AD zone projects advanced ground, naval, and air threats, creating significant security challenges.

15 minutes later, Yukon continued circling, waiting for the other Su-30SM to return and hamper the USS Bataan’s search and rescue efforts. Suddenly, he heard Showboat shout over the radio.

Yukon saw the new contact marked by Showboat on his Tactical Situation Display (TSD) located on the front left of his F-35B’s cockpit. It was tagged as unknown, but moving rapidly across the screen at 4,500 mph towards Showboat. Yukon’s gut told him something was wrong, so he quickly switched his APG-81 radar onto “active” mode.

In a second, the Active Electronically Scanned Array (AESA) radar on Yukon’s F-35B scanned the object and autonomously identified it as a Russian 40N6 missile. As the F-35B’s datalink automatically transferred its identification to Showboat’s AWACs and other forces in the area, he said, “Showboat, Yukon, Bullseye, 230 degrees for 340 kilometers, 5,000 meters, SAM launch! Break left! Break left!”

Within 10 seconds, Yukon heard Showboat shout “Break…Mayday! Mayday! May…!” All what was left was static. On his TSD, the icon denoting Showboat’s AWACs was gone from his display.

Launched from an S-400 “Growler” SAM launcher near the small coastal town of Yantarny in Kaliningrad, the 40N6 missile is a long-range weapon with an active- and semi-active seeker designed to destroy high-value targets, such as AWACs, electronic warfare, and other special mission aircraft. In 2012, Russia began outfitting at least two battalions in Kaliningrad with its new S-400 SAM system. The S-400s joined Kaliningrad’s S-300 SAMs, also an important threat.

Moscow’s deployment of S-400 missiles to Kaliningrad was key in transforming the outpost into an effective A2/AD zone. With a maximum range of 250 miles (although the system most likely can only detect advanced stealth aircraft with much smaller radar cross-sections, such as the F-22, at closer ranges), Kaliningrad’s S-400s are capable of turning the airspace over much of the Baltic Sea, Latvia, Lithuania, and half of Poland (including the capital, Warsaw), into a no-fly zone at the flip of a switch. General Frank Gorenc, the commander of US Air Forces in Europe, explained that Moscow’s SAMs and other systems “creates areas that are very tough to get into.” Although an assortment of stealth aircraft, electronic warfare capabilities, and long-range strike weapons can neutralize the S-400, strikes in Kaliningrad carry strategic consequences due to the risk of Russian escalation, ultimately making the suppression of enemy air defenses a complex challenge.

Without Showboat, Yukon and the naval forces accompanying the 22nd MEU were in the dark without any early warning capability. Yukon’s F-35B acted as the eyes and ears of the fleet with its AESA radar. But as he was miles south of the MEU and the closest AWACS replacement was in Germany, the decision was made to have one of the escort destroyers turn on its radar’s “active” mode. This decision would give away the MEU’s precise location, but was necessary to establish a 360-degree view of the deteriorating situation.

The USS Truxtun powered on its SPY-1D radar and Mk 99 fire control system to restore awareness. Although the Truxtun could now detect targets over 100 miles away, Yukon’s F-35B continued to play a role with its powerful AESA radar.

But within a minute of firing up its radar, “Overlord,” Truxtun’s operations specialist, announced “10 unidentified tracks, Bullseye 187 degrees for 280 kilometers, and closing fast.”

Yukon looked down on his TSD and saw the unidentified tracks appear near the top edge of the screen. They were moving quickly down the display at an angle towards the MEU, but not as fast as the S-400 missile’s earlier observed path. At the current pace, they would reach the fleet in about 410 seconds. Yukon banked his plane and burned towards the unknown contacts.

About a minute later, Yukon’s AESA radar picked up all ten of the contacts, identifying them as P-800 Oniks anti-ship cruise missiles. The F-35B’s computer immediately transmitted the data to other the Truxtun and other NATO forces in the immediate area. Within less than a second, the Truxton’s AEGIS Combat System processed the threat information and autonomously launched 20 SM-2 SAMs towards the incoming Oniks missiles, targeting each Oniks with two SM-2s.

Yukon burned towards the Oniks missiles, prepared to intercept. But Overlord was wary of Yukon going “winchester,” or running out of missiles, especially if additional Russian aircraft emerged.