Everyone in the U.S. Military Is Getting a Taste of the Army's New Handgun 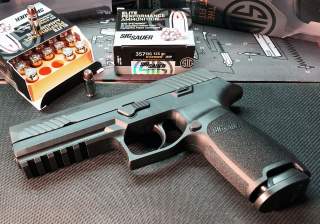 “We are unaware if other branches have conducted official testing of the MHS,” Taylor told Task & Purpose in an email. “Army test standards are more stringent than those followed by the commercial industry and civilian law enforcement agencies in the U.S., and the MHS passed all of the Army safety testing.”

It’s been an emotional roller coaster, but the moment of truth is finally here: Every branch of the U.S. armed forces, including the Coast Guard, has placed an order for the Army’s new Modular Handgun System.

Sig Sauer Chief Marketing Officer Tom Taylor told Military.com on March 15 that each service plans on acquiring and fielding its own arsenal of the company’s P320 pistols as the M17 and M18, as part of the $580 million contract for 195,000 sidearms the Army awarded the company back in January 2017.

The services have been eyeing the new MHS since at last May 2017, but Taylor said the remaining branches “have orders that will be fielded starting later this year and early next year.” But apart from the Marine Corps’ own explicit order for 35,000 of the sidearms as part of its fiscal 2019 budget proposal, it’s unclear if the other branches intend to adopt the M17 as widely as the two infantry services.

Indeed, the other services may want to exercise caution, given the past problems that have plagued the P320, including accidental discharges, frequent stoppages, and the ejection of live ammo, detailed in a Pentagon report published in 2018. As Dawson told Military.com, the other services “were involved in the entire acquisition process” and are almost certainly aware of the issues the Army discovered during testing in 2017.

“Final validation testing with the USG is planned within the next month,” Taylor told Task & Purpose in an email. “The MHS that was fielded in November 2017 met all Operational and Safety requirements and minor changes will make the system even better.”

According to both Sig Sauer and the DoD, those flaws are no longer a problem: Dawson told Task & Purpose in January 2018 that Sig Sauer “corrected this issue” prior to testing and fielding, and the service would “develop a plan to retrofit any fielded MHS” with future engineering changes.

Taylor says that the company only ever shipped P320s to the Army that had already been modified to address the accidental-discharge problem, and has since changed its testing regimen to ensure that the issue didn’t evade engineers in the future. “Our gun does pass every standard we know of, but we decided that after this, we need to have a higher standard for our testing,” he told Task & Purpose in January. “We are more confident that the issue is resolved.”

But if the accidental discharge problems that Sig Sauer and the Army missed in testing were the result of an unusual drop angle, as Taylor told Task & Purpose, it’s possible other, unexpected circumstances may yield some problems for troops downrange.

The other services likely know this. Take the Air Force, which at one point expressed interest in locking down 130,000 pistols. In December, the Air Force’s testing center at Wright-Patterson Air Force Base in Ohio put the MHS through a set of tests unique to the service: namely, strapping a pair of pistols across the chest of a test dummy and simulating a cockpit ejection.

“The test addresses the new modular handgun system’s capability to resist damage during ejection and still function as designed after sustaining ejection forces,” an Air Force public affairs official noted at the time, adding that “this is the first time any service has conducted this type of demonstration to ensure a sidearm is safe for aircrew to carry in ejection seat aircraft.”

But beyond the Air Force, the other services are staying mum. When asked by Task & Purpose about branch-specific MHS testing in light of the January Pentagon report, a spokesman for Marine Corps Systems Command declined to comment; representatives for the Navy and Coast Guard did not respond.

“We are unaware if other branches have conducted official testing of the MHS,” Taylor told Task & Purpose in an email. “Army test standards are more stringent than those followed by the commercial industry and civilian law enforcement agencies in the U.S., and the MHS passed all of the Army safety testing.”

That’s OK, though: If there are any issues downrange, leaders will almost certainly hear about it from those troops who suffer the consequences.