Everything We Learned From Russia's Massive Zapad Military Exercise 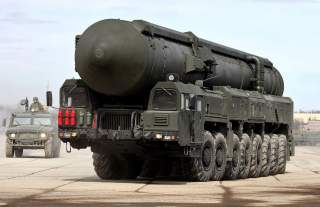 The conclusion of the large-scale Russian-Belarusian Zapad-2017 military exercise allows some initial reflections. Though the Zapad exercise series is a regular feature of the Russian strategic-operational exercise family, this is its first installment since the 2014 Ukraine crisis and the ensuing standoff between Russia and the West, explaining much of the interest in this year’s event.

Throughout the buildup to the exercise, the Russians and Belarusians have been insistent that it is purely defensive exercise; “Zapad” may literally translate to “West,” but the west in mind was the western portions of Russia and Belarus. Nevertheless, loud concerns were expressed at the start of the exercise that the Russians might use this exercise as an excuse to establish a permanent base in Belarus or else to practice opening a land corridor to the exclave Kaliningrad Oblast. In response to these concerns, NATO launched its own exercise in western Ukraine, the Ukrainians conducted a large command-staff exercise across the country, right-wing groups assembled forces to defend northwestern Ukraine, Sweden held its largest exercise in twenty-three years on the Baltic Sea directly across from Zapad, and the United States increased the size of the NATO Baltic Air Policing presence.

For all these signs and warnings, the exercise has ended with nothing significant having happened (yet). The Russians are not promised to have fully withdrawn from Belarus until September 30 and Belarusian President Alexander Lukashenko has remained vocal about how the occupation will not occur.

So, with this question yet unanswerable, what did we learn?

If there is one fact of contention that has consumed the attention of Western observers, it is the size of the exercise. Russia and Belarus adamantly claimed that only 12,700 soldiers would participate to keep the number under the magic 13,000 number under which more observers would be required by the Vienna document whereas other estimates put the true number as high as 240,000.

I do not have sufficient intelligence assets to confirm or deny these numbers, but it seems highly likely that the total number of soldiers did exceed 12,700 simply given how many formations were mobilized for Zapad-2017. Virtually the entire Russian 1st Guards Tank Army and 11th Army Corps plus considerable elements of the 6th and 20th Armies, the Baltic Fleet, and all three airborne divisions of the Western Military District were activated for the exercise. In addition, just about every Belarusian maneuver unit took part. To top that off, the Belarusians used the exercise as an opportunity to train their reserves. Rosgvardiya, the National Guard of Russia, also participated in the exercise and their numbers almost certainly are not included in the 12,700 if only because they are not actually “soldiers.” However, their precise activities in Zapad-2017 have as yet not been widely released.

Though this list does not necessarily prove that the number 12,700 was exceeded, it should further be noted that Zapad-2017 was not the only exercise going on in Russia at this time. Leaving aside the exercises with China and Egypt still ongoing in other parts of the country, particular note should be given to the final summer training exercise of the Northern Fleet in the Barents Sea and an ongoing exercise to practice maneuver among the Strategic Rocket Forces. This latter point was coupled with a launch of a Yars ICBM on the last day of Zapad. Russia has a long history of combining events occurring in different parts of the country to take part in one grand narrative.

Given that Zapad-2017 was acknowledged as the most important exercise of the year, it seems extremely likely that these should be considered as part of the total exercise of the “Zapad expanded universe” beyond the mere Western Military District.

As for the narrative of Zapad-2017, more information may soon be gleaned from further analysis, time, leaks, and press releases from Russia and Belarus, but one matter that should be borne in mind is the Belarusian declaration that Zapad was a test of their North-Western Operational Command. Belarus has two operational commands: West and North-West. This declaration suggests a scenario more inclined to portend to a relief-of-Kaliningrad operation of the Baltic region rather than conflict with Poland and Ukraine, though this cannot be definitively stated.

The active phase of Zapad-2017 may now be complete, but we have yet to see what else the Russians do before they leave Belarus if anything. Further analysis and data release may also shed further light upon the circumstances.