Everything You Need to Know About Russia's Lethal Tank Force 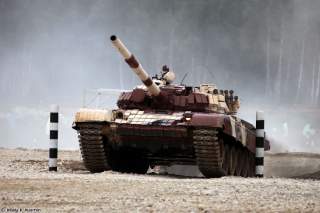 While the developmental T-14 Armata captures the spotlight, the bulk of Russia’s armored forces consist of upgraded T-72B3 main battle tanks. Other tanks like the T-90 and the legacy T-80U are still relatively rare. Nonetheless, Russia’s current armored force meets Moscow’s requirements even without the Armata—which is both expensive and potentially unneeded. In fact, Russia might get more bang for the buck by addressing the two key weaknesses of its armor—a new gun design and new ammunition.

“The Armata is a capable looking platform, however it remains to be seen what the tank variant of it actually looks like—the final version” Michael Kofman, a research scientist specializing in Russian military affairs at CNA Corporation, told The National Interest. “It’s going to field trials. It’s still in development, and, frankly, it will take another two years to see what changes it will go through.”

Initially, the Russian military is likely to start deploying the new tank in company-sized elements in the Western half of the country before scaling the units up to battalions. Follow-on fielding will depend on just how well the T-14 performs in an operational environment. “The Russians will adjust accordingly,” Kofman said.

Moreover, the T-14 is expensive compared to previous Russian and Soviet-designed tanks. The tank features a new unmanned turret, active protection systems, a new armor package, new sensors and networking as well as a new higher-pressure version of the standard Russian/Soviet 125mm gun. “The money to buy them isn’t there,” Kofman said. “And the need to buy them can't be well justified based on Russia's likely adversaries either.”

The T-72B3 features a higher compression version of the standard Soviet 125mm cannon, improved thermal sights, good reactive armor and a potent fire-control system. Moscow’s near-term goal is to phase out the gas-guzzling T-80U and unify its main battle tank fleet around the  T-72 platform. The older T-64 was phased out in 2013. "The reason why is so you have one tank platform,” Kofman said. “The T-72 is easier to maintain, cheaper to maintain, less sophisticated and not as big of a gas-guzzler.”

(Recommended: Does France Have Better Tanks than America or Russia?)

But at the end of the day, as Kofman noted, the T-72B3— and indeed the T-90A—is an upgrade of a 1970s-era tank. Both designs retain the key faults of the original—the ammunition storage system will explode in a catastrophic fashion if the tank is penetrated. “If you penetrate a T-72, often its ammunition will cook-off and blow-off the turret,” Kofman said.  "No matter what you call it, you're still working with a late version of the T-72 and many of its integral faults or limitations."

Still, it is more than capable of handling missions against most states within the former Soviet Union. Indeed, unlike the Pentagon’s exquisite solutions, the Russian military operates on the concept of its hardware being good enough. “What they figured out was the real concept of sufficiency,” Kofman said. “The Russian T-72B1—not even the B3—is good enough to take on all former Soviet republics. The T-72B3 can take on the better tanks Russia faces in its periphery—and T-90 is really a higher-end version with better protection, fire control, and active defense against ATGMs [anti-tank guided missiles] and anti-tank rounds.”

Russian active protection systems and reactive armor render provide good defense against many Western ATGMs—especially the weapons that fly a direct attack profile. Among the few exceptions to that rule are the Javelin—which uses top-attack—however the weapon has a short-range. And, T-14’s new active protection system has vertically launched projectiles which the Russians tout as an effective defense against even top-attack weapons. Kofman said that he has doubts about how capable the Armata’s active protection might be against a top-attack, but it will be effective against most Western ATGMs. The problem for the West and the United States is that Russian ATGMs like the Kornet can penetrate any Western tank including the M1A2 SEP v.3 with ease. “Russian Ground Forces' ATGM can can-open most armored vehicles the West has,” Kofman said. “They can take on an M1A2, no problem. They can take on our allies' tanks as well.”

Traditionally, Russian tanks have somewhat lagged behind the West in terms of fire-control and sights.  Many of those currently fielded use either Belorussian sights or license produced French equipment for sighting and thermal imaging.   Russian tanks have other attributes less often discussed, such as their ammunition.  It's unclear how good new Russian ammunition designs are, and the available supply in the current force. “We never talk about the round that they shoot,” Kofman said. “They're likely not as good as ours, and they may not have much supply of modern ammunition.”

That means that even the T-14—once it is operational—will not be able to penetrate enemy tanks even if it can shrug off an incoming 120mm round from a Leopard 2 or Abrams. The T-14 is designed to be highly survivable and sustainable instead of focusing on raw firepower and numbers. But the new tank needs a new gun—and exactly what that final gun will be has not been settled, Kofman said. Russian sources have suggested the new gun could be a 152mm weapon or something else entirely. “The Armata family is missing two things—a new gun and better ammunition,” Kofman said.

Ultimately, it remains an open question how many Armatas will be fielded. If Russia continues it economic death-spiral, it is likely that the Russian military will focus more on personnel and training over new and expensive platforms. Only time will tell.