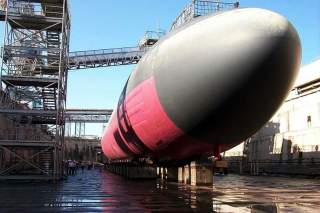 The U.S. Navy and Lockheed Martin are restarting production of the latest version of the Mk-48 heavyweight torpedo. The new Mod 7 version— which is being upgraded under the Common Broadband Advanced Sonar System (CBASS) program—will help the Navy’s attack boats take on the threat from advanced Russian and Chinese-built ships and submarines.

“The latest guidance and control technologies for Mk-48 torpedo are thanks in part to Lockheed Martin’s $10 million investment in manufacturing efficiencies, facilities, and laboratories to ensure navies can pace the threats in littoral and deep sea environments,” said Tom Jarbeau, Lockheed Martin Mk-48 program director. “We are building on our five decades of experience in undersea systems and our strong record of providing complex electronic systems to our customers on schedule and on budget.”

Lockheed Martin developed the new version of the Mk-48 under a five-year $425 million contract that was awarded in 2011. While the Mod 7 upgrade will be applied to new torpedoes, it can also be used to upgrade older weapons to the new standard. Under the terms of the contract, Lockheed Martin will deliver 20 Mod 7 CBASS kits to the Navy per month. The company expects that it could sell as many as 250 torpedoes to the Navy over the next five years.

Compared to older versions of the venerable Mk-48, the new modular Mod 7 variant increases sonar bandwidth. It can transmit and receive pings over a wider frequency band and it takes advantage of broadband signal processing techniques to greatly improve the weapon’s search, acquisition and attack effectiveness. The new weapon is also much more resistant to advanced enemy counter-measures. Perhaps most significantly, the Mod 7 uses modern open-architecture computers, which means it will be easier to integrate new hardware and software upgrades.

The new upgrades will keep the venerable 21-inch diameter, 3500lbs weapon—which incorporates a 650lbs warhead—relevant well into the future. The original version of the weapon was designed during the 1960s and entered service in 1971 with the U.S. Navy. Over the years the Mk-48 has been upgraded many times and remains the principal anti-ship and anti-submarine weapon onboard American submarines—and indeed many allied navies. Versions of the Mk-48 are in service with the Canadian, Australian, Dutch and Brazilian fleets.

The Mk-48 will remain the U.S. submarine fleet’s primary weapon for the foreseeable future.