Everything You Need to Know: B-1B Bombers, F-15s and F-2 Strike Fighters Fly Over Korea 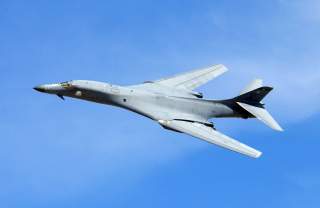 The United States and its allies in the Western Pacific are attempting to ramp up the pressure on North Korea following the Kim regime’s recent intercontinental ballistic missile test.

As part of that effort, the United States Air Force flew a pair of B-1B Lancer strategic bombers over the Korean peninsula. Four South Korean Boeing F-15K Slam Eagles joined the American bombers alongside a pair of Japanese F-2 strike fighters. The Air Force says that the mission was a direct response to the North Korean missile test.

"Diplomacy remains the lead; however, we have a responsibility to our allies and our nation to showcase our unwavering commitment while planning for the worst-case scenario. If called upon, we are ready to respond with rapid, lethal, and overwhelming force at a time and place of our choosing."

The 10-hour sortie by the B-1B crew, while impressive, was mostly an effort at reassuring jumpy allies. The United States has very few good military options which would prompt North Korea to give up its nuclear and intercontinental ballistic missile programs. Indeed, in the event of a war, South Korea and large parts of Japan would likely be devastated by North Korean missile and artillery strikes.

The best and most realistic option is to build up allied air defenses in the region.

Indeed, hardening U.S. allies while building up American defenses of the homeland might be the only rational course of action. As was the case in 1949 with a newly nuclear-armed Soviet Union, the United States will have to likely live with a nuclear-armed North Korea.