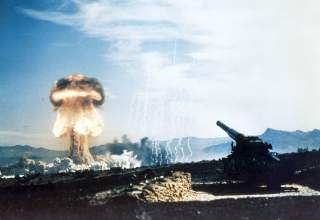 Indeed, other researchers have found scant evidence that Russia has lowered its nuclear threshold. “Clearly, the Russian threshold for employing nuclear weapons for signaling purposes is lower than the West’s,” Kristin Ven Bruusgaard is a Stanton Nuclear Security Fellow at CISAC, Stanford University and a Ph.D. student at King’s College London wrote for War on the Rocks. “This explains the numerous examples of what Western policymakers call irresponsible nuclear saber-rattling. While it seems prudent to make the Russians ‘think twice about nuclear threats,’ Moscow’s saber-rattling does not equate to a lower threshold for using nuclear weapons. Russian doctrine, declaratory strategy, and strategic debate all indicate the opposite: Improved conventional and non-military capabilities will delay the point at which Russia may use nuclear weapons in conflict.”

The consensus among arms control experts is that Russia will reduce its dependence on nuclear weapons as more long-range conventional precision-guided weapons enter its inventory. NSNWs will still be a feature of Russian military doctrine, but there will be less emphasis on that aspect of the Kremlin’s power.

“It’s not going to do away with it, of course, but like in our military—once we got more advanced conventional weapons—our planners reduced reliance on tactical nuclear weapons,” Kristensen said. “It’s likely we will also see that happening to some extent in the Russian military forces.”

Sokov agreed with Kristensen’s assessment. “Conventional missions for these assets (Iskander, Kh-101/102 etc.) are, in my view, more important than nuclear ones,” Sokov said. “Nuclear missions are a ‘back-up’ for the case of a really big bad conflict, which has extremely low probability—basic deterrence in several variants. Conventional missions are about actual use in support of foreign policy – Syria is the example of the main role of these assets.”

Ultimately, Russia’s reliance on nuclear weapons depends on policy makers not in Moscow, but in Washington. How the United States alters its posture to rely more on nuclear weapons (or not)—now that precision weapons are no longer the sole purview of the Pentagon—will determine to what extent the Russians will rely on their own nuclear forces.