Everything You Need to Know: The History of U.S. Nuclear Weapons in South Korea 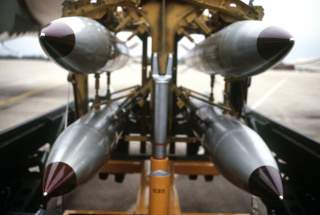 American tactical nuclear weapons were stationed on the Korean Peninsula for much of the Cold War, on call and ready to repel a North Korean attack. Nuclear bombs, artillery shells and missile warheads were withdrawn from Korea in 1991. Now, as reports surface—and are later denied—of South Korean requests to return tactical nuclear weapons to U.S. bases in Korea, it’s a good time to reflect on the history of the weapons and why they were sent to the country in the first place.

The U.S. history of nuclear weapons and Korea dates back to the Korean War, when President Harry S. Truman debated using nuclear weapons to stanch the China’s Thanksgiving counteroffensive. The following spring, nine nuclear bombs were transferred to Okinawa, along with nuclear-capable B-29 bombers, in case the decision was made to use them. Truman went so far as to predelegate authority to use the bombs to Gen. Matthew Ridgway, commander of U.S. forces in Korea, but Ridgway declined to use them.

Nuclear weapons were first based on the Korean peninsula in 1958, as a result of the U.S. Army’s reorganization of combat divisions into the so-called “Pentomic” structure thought to be ideal for battlefield nuclear warfare. U.S. Army forces in Korea received M442 nuclear shells for 203mm (8-inch) howitzers. Armed with a twelve-kiloton W33 nuclear warhead, the M442 had a range of eleven miles. Army forces in Korea also received the Honest John artillery rocket, widely considered the first American tactical nuclear weapon, with had a range of 5.3 to 15.7 miles. Honest John was equipped with a W7 warhead with a yield of ten kilotons or a W31 warhead with a sixty-kiloton yield.

Under army control, the M442 and the Honest John would be used against advancing waves of North Korean troops, wiping out entire brigade-sized formations of the Korean People’s Army with the heat and blast of a nuclear explosion and contaminating the area with deadly radioactive fallout. Another weapon deployed in 1958, the atomic demolition mine could be placed along likely North Korean advance routes. Highly mobile at just sixty pounds, the mine could be deployed just before an attack and had a yield of twenty kilotons.

In 1958, the U.S. Air Force deployed fifteen Matador cruise missiles in South Korea. Matador missiles flew at subsonic speeds, had a 620 mile range and carried a forty-kiloton nuclear warhead. The missiles, under the control of the 310th Tactical Missile Squadron at Osan Air Base, were only briefly in service before being withdrawn in 1961. Matador missiles would have almost certainly have been launched at Pyongyang and other strategic North Korean locations.

In 1961 the air force replaced the Matador cruise missile with the Mace, and by 1962, the U.S. Army in Korea added the Sergeant surface to surface missile, a missile with a 200 kiloton nuclear warhead and a range of seventy-five miles. The M28/29 Davy Crockett tactical nuclear recoilless rifle, with a ten to twenty ton nuclear yield, was in service in Korea from 1962 to 1968. In 1964, the Army deployed the M454 155mm nuclear artillery shell with the W48 warhead. The W48 warhead was sub-kiloton in yield, providing an explosive equivalent to just 70 to 100 tons of TNT.

The U.S. Air Force maintained an arsenal of nuclear gravity bombs in Korea. B43 and B57 bombs were likely stored on the peninsula, and B61 bombs were stationed in South Korea when all nuclear weapons were ordered removed in 1991. Air Force F-4D Phantom II fighters were the delivery vehicles and nuclear bombs were stored at Osan Air Base, Kunsan Air Base, and Kwangju Air Bases.

U.S. tactical nuclear weapons deployed to South Korea were kept a high state of readiness, not only as a hedge against a no-notice invasion by North Korea but also as part of the Single Integrated Operating Plan, or SIOP, that would govern an all-out nuclear war. As part of the SIOP, the 8th Tactical Fighter Wing at Kunsan Air Force Base kept four Phantom fighters loaded with nuclear weapons ready at all times.

Image: A frontal view of four B-61 nuclear free-fall bombs on a bomb cart.​