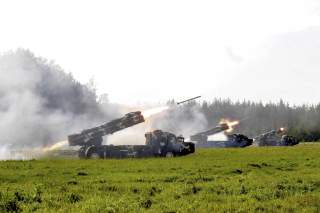 During and after Zapad-2017, commentators speculated wildly on why Russian President Vladimir Putin and Belarusian President Alexander Lukashenko did not observe the exercises together. Lukashenko claimed at the end of the exercise that Zapad was so large and widely distributed that it made no sense for them to only go to one training range to observe it together.

There seems little reason to doubt Lukashenko’s statement. The exercise took place across eleven training ranges or poligons as they are known in Russian: eight in Belarus and three in Russia. From north to south, therefore, Zapad participants were spread across nearly 700km and from west to east about 600km. Furthermore, within the individual ranges, different tasks were being carried out by different groups. This is broken down in a graphic I created, which combines the publicly stated tasks at the individual poligons and observations of what took place at each one.

As can be observed on this map, the ranges form an arc from western Belarus, across the Belarusian capital of Minsk, north toward St. Petersburg. Separately, an aspect of the exercise was carried out in the Russian exclave of Kaliningrad between Poland and Lithuania in addition to some naval components in the Baltic Sea. They conspicuously surround the territory labeled Veyshnoria and offered an interesting set of jumping-off points for a campaign against it and its neighbors Vesbariya and Lubeniya.

Russia has spent much of the past two decades upgrading its air defense capabilities to blunt NATO air operations. After witnessing the NATO intervention in the Yugoslav Civil War exclusively with airpower (and impunity), Russia recognized the importance of maintaining an air defense edge to reduce its vulnerability to this type of punishment. Accordingly, air defense played a major part of the exercise while air power contributed its own roles to the Zapad campaign, including combat air patrols, interdiction and close air support.

The traditional strong suit of the Russian military, massive conventional ground operations were also exercised in Zapad. These exercises featured a heavy deployment of tanks and other armor as well as the enormous power of Russian and Belarusian fires. Furthermore, as will be noted below, Belarus and Russia achieved their greatest degree of direct cooperation in these conventional operation exercises.

Russia’s Kaliningrad exclave faces an existential challenge in a prospective war against the NATO alliance: sandwiched between NATO members Lithuania and Poland, the latter of which has more tanks than any other European country except Russia itself (and distant Greece). Accordingly, the forces of the Baltic Fleet and 11th Army Corps, both of which are based in Kaliningrad, have long focused on how to resist a potential enemy invasion long enough for the main body of the Russian and Belarusian militaries to relieve them. At the start of the exercise, Kaliningrad practiced a recall of reservists in the event of a major crisis. It should furthermore be no surprise that both the Baltic Fleet and the 11th Army Corps practiced a variety of measures to prevent enemy ingress into the exclave while the remainder of the Zapad participants combined both defensive and offensive tactics.

After several rounds of NATO expansion following the collapse of the Warsaw Pact, the alliance now has considerable strategic depth. Disrupting NATO’s logistical access to the battlespace will be of enormous importance to Russian operational planning, especially as Russia can expect NATO to try the same against it. This was served through three major portions of the exercise: airborne assaults, ballistic missile strikes and long-range aviation operations.

Finally, Russia and Belarus need to ensure that they can continue combat operations beyond the opening phase of the conflict should it be of prolonged duration. To that effect, Belarus conducted reservist training at a separate poligon of the exercise. Other psychological exercises were carried out to maintain troop morale.

However, this gets thrown in a slightly different light when one then compiles all the mentions of particular units taking part in the exercise at which particular poligon. Having reviewed the sources, I have compiled this map with the official releases thus far. The most notable aspects of this plotting are how many poligons featured only one country participating. Last year, Belarus caused controversy when it debated adopting a military doctrine that prohibited deploying soldiers abroad, for exercises or otherwise. Ultimately, CSTO pressure prevented Belarus from adopting this policy, but it nevertheless practiced against potential Russian destabilization activities anyway.

In Zapad-2017, Lukashenko again welcomed Russians into the country, but did not send any Belarusian troops out. This was certainly justified by the fact that the hypothetical war took place on Belarusian territory, but is nevertheless significant. It is also worth noting that Belarus is sending its own Spetsnaz soldiers to Russia this month for a bilateral exercise at the Strugi Krasnye poligon.

The Russians who did practice in Belarus did so at the conventional operations poligons exclusively, at least according to the data so far. Smaller unconventional exercises were also held among Russian troops in Kaliningrad and at the Luga poligon, but it still raises important questions on why the two countries did not practice together for these more complicated exercises.

More data may still come out about Zapad-2017 to explain these nuances, but for now it makes for curious observation.