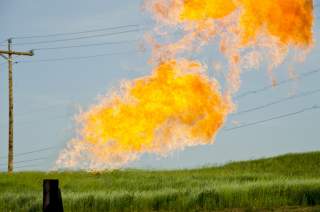 Hayden, who is also a former NSA chief, made his suggestion in response to a question from Florida Democratic Sen. Bill Nelson regarding a potential U.S. response to Russia’s activities in the U.S.

“I would respond across the board,” said Hayden. Specifically, he suggested a strategic solution would be to get Europe off its Russian energy dependence.

“And I think I’d have the president fly up to Eerie, get in a motorcade, stand on top of Marcellus shale and [say] ‘this is going to Europe, this gas is going to wean our European friends off their dependence of Russian energy,'” said Hayden. ‘”And we’re going to do that in ten years.'”

Marcellus shale refers the Marcellus formation in western Pennsylvania, West Virginia and southern New York, considered one of the largest available sources of natural gas in the U.S.

Gazprom, a Russian government-backed energy company, is Europe’s largest provider of gas, supplying nearly a third in 2015. Europe’s over-reliance on Russian energy is at odds with the EU and NATO’s desire to push back against Russia’s aggressive policies. Russia has used gas as a weapon against Europe before, most notably in 2006 and 2009 when Gazprom ceased shipping through Ukraine in the middle of winter.

Increasing gas supplies to Europe would not only help prevent future shortages, but it could also push back against the Kremlin. Russia relies on oil and gas exports for approximately half of its fiscal revenue. The current abundance of cheap oil, in conjunction with international sanctions, has taken a toll on Russia’s economy. Hayden thinks taking away the Kremlin’s oil trade would deal a decisive blow.

“I can think of nothing that pulls the choke collar on Vladimir’s chain more than: ‘We’re taking your only hole card away from you,'” Hayden told CNN in December.