Explained: How to Start a U.S.-China Cold War 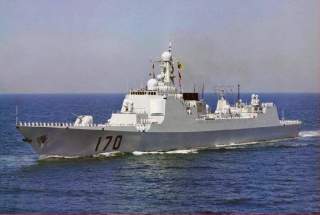 Last month, a majority of the Republicans in the U.S. Senate sent an open letter to the leadership of Iran.

In it, they declared that any deal on Iranian nuclear technology between Tehran and the Obama Administration might be undone by Republicans in Washington, especially if they re-take the White House in 2016. This was widely understood as an effort to undermine President Obama's search for a nuclear deal with Iran. There was much soul-searching about whether the GOP had overstepped its constitutional bounds, the Republicans' “insurrectionary” disdain for President Obama, and so on.

But what I found most notable is how dangerous these sorts of neoconservative shenanigans would be if they were applied in Asia.

As I have argued elsewhere (short version; long version), neoconservatism is handicapping America's ability to pivot to Asia. Although the Middle East is objectively less important to America's future than Asia, the Middle East plays a far greater role in our politics and activates far more social mobilization and political attention, particularly on the right.

For example, the foreign policy “litmus tests” (ie. where public opinion is deeply informed and highly committed) for GOP presidential contenders all turn today on Middle Eastern questions such as Israel, ISIS and Iran. This was evident in the presidential campaign debates four years ago, and I predict will be so again in the next 18 months. And in classic neocon style, the “right” answer to those litmus tests is almost always more hawkish chest-thumping, rejection of any deals or negotiations, accusations of appeasement and retreat, higher military spending, and so on – what Daniel Larison once aptly called “omidirectional belligerence.”

To my mind, this is reckless and arrogant, the sort of “exceptionalist” imperiousness that much of the world finds so fatiguing about Americans. But it is also politically feasible in the Middle East, because America's opponents there are so weak.

Yes, ISIS is terrifying and an Iran with a nuclear weapon is unnerving. And certainly the forces of Islamism across the region espouse values deeply antithetical to our own. In that sense, they pose a serious, long-term philosophic challenge to liberal modernity. But all the actors in the region – state and non-state – are actually quite weak. GDPs are small; militaries are weak and shot-through with cronyism; states are fragile with highly illegitimate 'institutions'; many governments barely control their whole territories. And non-state actors, terrorist or otherwise, are even weaker challengers; for all their ideological-theological fire, Islamist groups have had a hard time actually building durable organizations, parties, and states. That Israel, a country of just eight million people, is considered the region's dominant military power signifies just how secure America is from the region's dangers.

In short, America enjoys the luxury of an enormous power buffer in the region, and that asymmetry creates the space for mischief making like that GOP Iran letter. The U.S. can absorb the costs of domestic irresponsibility and constitutional in-fighting, posture belligerently and abjure deals and negotiation, all because the costs are rather low (for the U.S.). Even were the US to bomb Iran, the conflict would be far from the U.S. homeland with a minimal (or at least not very visible) impact on most Americans. Indeed, the U.S. managed to fight an entire war in the Middle East that went horribly wrong and alienated much of the planet, yet without seriously jeopardizing its regional hegemony. That is astonishing asymmetric power.

None of this applies at all in Asia.

One of my greatest concerns for U.S. foreign policy in the coming decades is that this neocon “omnidirectional belligerence” will, in time, come to the Asia-Pacific. Neocon belligerence and recklessness are not feasible in Asia as they are in the Middle East, in Cuba or Venezuela, or even in responding to Putin. John McCain brought this type of thinking to Europe when he famously said “we are all Georgians now” after the 2008 Russian invasion. Russia's stagnant GDP and population made such talk more feasible.

But the game in Asia is in far more flux than in eastern Europe, and America's power advantage is thinner here than anywhere else. This means diplomacy and accommodation — the messy realpolitik of wheeling and dealing with regimes we may not always like, such as China – are more necessary. These are not traits neoconservatives excel at. Indeed, they damn them as “appeasement of evil” and so on.

But neocon high-handed moralism and American exceptionalism in this business-like region will fail spectacularly. Neoconservatism will make an enemy of China, permanently end the possibility of any nuclear deal with North Korea (unlikely to be sure, but that is for Seoul to work out, not the US), and frighten American allies and friends such as South Korea and Vietnam with the thought that the U.S.  is a war-monger.

No one wants a repeat of the Iraq war in North Korea or Southeast Asia. No one wants grandstanding, culturally-ignorant American exceptionalists lecturing the region about the “freedom agenda.” Much of Asia may share the neocon belief that democracy is good for the world, but the neoconservative means to that end – threats, moralistic self-congratulation, refusal to negotiate with “evil,” reckless use of force – will just provoke the Sino-U.S. Cold War everyone is worried about.