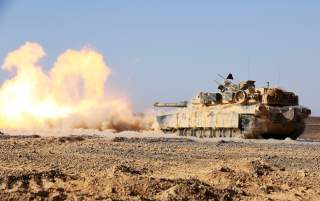 Having spent a lot of time on tanks, I would argue that pursuing technical solutions that don’t account for the human dimension of sustained ground combat is a mistake. The four-soldier crew gives flexibility that three cannot.

Pulling local security is a real requirement inside a tactical assembly area. Doing so while maintaining weapons, conducting maintenance, eating, and getting some sleep is already tough. When in radio listening silence you need a runner, and during tactical road marches you need an air guard.

Tankers actually dismount more often than one might think. They often must ground guide their vehicles through constricted terrain. Someone must often get on the ground to talk infantry or others, not on one’s radio net.

Maintenance is a physically demanding team sport, and everyone in the crew plays a role in it. More hands make heavy work less so. Having three on your crew is really not that rare given the vagaries of the personnel system, so most crews have dealt with that problem during training. Their opinion about four being better than three is well informed by personal experience.

Stuff stops working on big complicated vehicles all the time and you generally train to work around fire control system failures and the loss of a crewman. How you could work around a broken autoloader is difficult to imagine. You can fight a manually loaded main gun even without turret or engine power. One assumes an automatic loader requires power.

When replacing track on an Abrams a four-person crew can get by, but smart platoons generally pitch in as a team effort. It is a miserable experience, regardless, especially under field conditions in bad weather. Recovery of damaged or broken vehicles is also a lot easier when you have more hands. And local security remains a requirement during recovery operations, so every soldier matters.

Col. Rich Creed is director of the Army’s Combined Arms Directorate at Fort Leavenworth, Kansas. A career armor officer, he has deployed to Bosnia, Iraq and Afghanistan. This article represents his own views, which are not necessarily those of the U.S. Army or the Department of Defense.