Exposed: Are Secret U.S. Spy Planes Flying Over the Pacific? 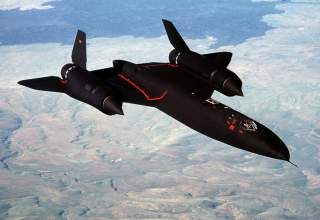 The Pentagon is unflinchingly tight-lipped about any new, high tech planes it has in the works. But every so often, a bit of information manages to squeak out into the public domain.

In 2013, the U.S. Air Force sent a secret spy plane out over the Pacific region. The unknown aircraft – possibly a drone – flew “national collection missions” – a euphemism for strategic intelligence against states like North Korea or China.

It was one of five different types of aircraft flying these missions. The Pentagon’s top headquarters asked the flying branch to use its U-2 Dragon Ladies and RC-135V/W Rivet Joints to take high resolution pictures and scoop up radio chatter, according to an official history of the Air Force’s Intelligence, Surveillance and Reconnaissance Agency – a.k.a. AFISRA – for that year.

War Is Boring obtained the heavily redacted historical review through the Freedom of Information Act. In 2014, the flying branch renamed AFISRA as the 25th Air Force.

The Combat Sents have special fine-tuned hardware to analyze foreign radars, while the Cobra Balls keep tabs on ballistic missile launches. We don’t know the identity of the fifth and final aircraft the censors decided to scrub from the document. We have a few guesses, and we do know what it’s not.

In the same paragraph, the history mentions by name all of the Air Force’s manned aerial spooks that it admits to having with the exception of the tiny MC-12W Liberty. While specific details are classified, the flying branch makes no secret of the high-flying U-2, the airliner-sized RC-135s or their regular usage around the world.

So what is the mystery aircraft? The blacked-out portion of the document suggests the missing portion is five to seven characters long. With that in mind, the super secret RQ-170 Sentinel – a six character designation that would fit in the redacted segment – is one possibility.

Lockheed built an estimated 20 to 30 RQ-170s – also known as Wraiths – for the Air Force sometime in the early 2000s. The 30th Reconnaissance Squadron at Creech Air Force Base in Nevada owns all of these bat-winged pilotless spies.

In 2007, journalists first spotted the Wraith at Kandahar Air Field in Afghanistan, earning the nickname “the Beast of Kandahar.” On Dec. 4, 2009, the Air Force formally announced the Sentinel to the world … and little else.

That same year, the drones were flying missions in the Pacific from Andersen Air Force Base on Guam and Kunsan Air Base in South Korea, according to previous Air Force histories we obtained through FOIA. During the latter deployment, the Wraiths likely gathered information about North Korea’s nuclear, ballistic missile and space programs.

And as of April 2014, at least one of these stealthy flying wings was still on duty, according to an accident report in Combat Edge, Air Combat Command’s official safety magazine. ACC owns the bulk of the Air Force’s combat aircraft, including its spy planes and the RQ-170s.

If the RQ-170s are still in service, the flying branch would have every incentive to keep using them. And the Sentinels and their crews already had experience in the Asia-Pacific theater.

Of course, the censored plane could be something entirely new. For decades, the Pentagon and the CIA have repeatedly acknowledged advanced aircraft projects — after the fact — only to decline to release any significant information about them.

In 1956, Washington tried to hide the true purpose of the U-2. Despite internal disagreement over the cover story, officials initially referred to it publicly as the WU-2 and called it a high-altitude, weather reconnaissance jet. The Air Force had said an earlier spy plane design was a purely experimental aircraft.

The same was true of the CIA’s A-12 Oxcart and its better known successor, the Air Force’s SR-71 Blackbird. In a speech during the 1964 election campaign, incumbent president Lyndon Johnson revealed the SR-71 and the YF-12A fighter jet to the public to counter criticisms from Republican challenger Barry Goldwater.

At that time, pilots had already been testing the still-secret Oxcarts for two years. While there was some real interest in a high-speed interceptor, the YF-12A project’s main job had been to hide the A-12 from prying eyes.

Despite the public admissions and much speculation, the Pentagon did its best to keep much of the SR-71 and its missions under wraps for more than a decade after Johnson’s speech. “In 1975, … I decided I wanted to apply for what was referred to as ‘The Program,'” former Blackbird pilot Air Force Col. Frank Stampf wrote in the forward to Paul Crickmore’s Lockheed Blackbird: Beyond the Secret Missions.

Currently, there may be as many as three different top secret designs in some sort of testing. In December 2013, veteran Aviation Week reporters Bill Sweetman and Amy Butler declared the existence of a successor to the Sentinel dubbed the RQ-180.

With an estimated wing-span of 130 feet, Northrop Grumman’s so-called “cranked kite” stealth design – similar to the B-2 bomber – was larger and likely more capable than Lockheed’s Wraith. When the story came out, Sweetman and Butler figured the Air Force might get their first RQ-180s – another six character nomenclature that would fit in our document’s blacked out portion – by the end of this year.

The month before, Lockheed announced it had been working on its own new design. Billed as a successor to the Blackbird, the SR-72 would have a top speed of Mach 6 – nearly twice that of the Cold War-era spy plane. Since the late 1980s, rumors have swirledabout Lockheed’s secretive Skunk Works design arm cooking up a new, super-fast stealth jet.

In October, the Air Force also announced that Northrop Grumman had won the contract to build the new Long Range Strike Bomber, or LRS-B. While there have been few firm details, it’s possible that this bomber could double as a spy plane … and we don’t know how many prototypes there might be already.

“I think you suggested when we talked to you last week that you would give us a number for the … aircraft involved in the … EMD contract?” Sweetman asked Air Force officials at the Pentagon’s LRS-B press conference on Oct. 27, referring to the initial engineering and design phase of the project. “So we did talk about that, but we are not going to release that number, sir,” Lt. Gen. Arnold Bunch, the military deputy to the Assistant Secretary of the Air Force for Acquisition, quickly told him.

If what is known about the U-2, SR-71 and RQ-170 projects is any indication, the Pentagon could easily have unknown jets in development or flying real missions. They might be related to other top secret designs like the RQ-180, SR-72 or LRS-B … or not.

What is clear — a secret spy plane was already snooping around the Pacific two years ago.