Exposed: China Did NOT Halt Island Building Project in the South China Sea 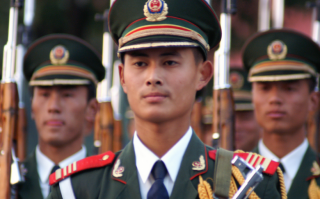 China has not halted work on its reclamation project in the South China Sea, despite reports to the contrary.

On Wednesday, Reuters and other international media outlets reported, citing remarks by China’s foreign minister, that China had stopped its island building project in the South China Sea.

When asked by reporters at a regional forum whether China would temporarily halt its island building in the South China Sea, Foreign Minister Wang Yi replied: “China has already stopped. You just take an aeroplane to take a look." Consequently, many international media outlets ran headlines suggesting that China had halted construction of those islands.

This is not the first time that this has been reported. Back in June, many international news outlets implied that China was halting its reclamation project in the South China Sea following a statement by the Chinese Foreign Ministry that said the island building project was nearing completion.

This is actually what is occurring in the South China Sea. Rather than halting the island building project, China is merely completing the dredging that has transformed seven reefs and rocks in the Spratly Islands into seven new artificial islands. Thus, China has not yielded to international pressure over its aggressive island building scheme; it has merely completed this phase of the operation.

The next phase of the operation is to complete construction of military and civilian facilities on the newly-created islands. In many cases, this work is already well underway. For example, news reports suggest that China is nearly construction of a 3,000 meter airstrip on Fiery Cross Reef, which is now a sizeable island.

This is an audacious action. As the terrific Asia Maritime Transparency Initiative at the Center for Strategic and International Studies has pointed out, this new airstrip is over twice as long as any existing airstrips in the Spratly Islands. This has ominous military implications. For example, a 3,000 meter airstrip will be able to accommodate bombers, which none of the other existing airstrips in the region can do.

As the Asia Maritime Transparency Initiative recently noted, “Fiery Cross reef has a runway long enough to land a Chinese H-6G bomber, using runway requirements derived from the Russian Tu-16K, and assuming that the runway has been reinforced. A bomber like this could perform combat operations within 3,500 miles of the reclaimed reef.”

Now that China has completed the dredging of the artificial islands, it can now focus more of its attention on building facilities like the Fiery Cross Reef airstrip that will allow Beijing to effectively militarize the islands. In fact, some analysts believe China will seek to build a second airstrip on Subi Reef, another feature that China has transformed into an artificial island.

This phase of the project, more so than the actual construction of the artificial islands themselves, is what worries the United States, Japan and Southeast Asia. Little wonder then that the Philippine Foreign Ministry responded to Foreign Minister Wang’s comment on Thursday by saying: “At the same time, China announced they are moving on to Phase 2, which is construction of facilities on the reclaimed features. The Philippines views these activities as destabilizing."

The military logic of all this, as Michael O’Hanlon argued in a Wall Street Journal op-ed, is to create “unsinkable aircraft carriers.” In other words, these islands will allow China to project power further away from the mainland in the southern part of the South China Sea, which Beijing claims nearly 90 percent of. Once phase 2 of its project is complete, these artificial islands will greatly enhance China’s capabilities to enforce its enormous claims.

While China almost certainly hopes that announcing the halting of the land reclamation projects will reduce criticism of its actions, its neighbors and the United States are unlikely to be fooled. China is not changing its actions in response to pressure; it is merely proceeding as planned.