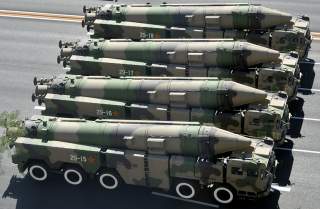 Despite recent media reports, China will not deploy nuclear weapons in Cuba.

This week, the Taiwan-based Want China Times reported, citing an article from the Fujian-based news portal Taihainet, that Beijing could station nuclear weapons in Cuba if the United States re-deployed tactical nuclear weapons to the Asia-Pacific.

“China could risk a repeat of the Cuban Missile Crisis by deploying its DF-31 intercontinental ballistic missile to Cuba if the United States decides to deploy tactical nuclear missiles to the Asia-Pacific,” Want China Times said in the report.

The report was then republished by other outlets like Defenseworld.net, an Indian-based defense website, as well as cited by reputable sources such as the Project on Nuclear Issues at the Center for Strategic and International Studies, which publishes a daily newsletter that curates nuclear news around the world.

The entire claim is ridiculous, however. To begin with, Washington is extremely unlikely to deploy tactical nuclear weapons in the Asia-Pacific any time soon. The only potential area tactical nuclear weapons would make sense is in South Korea, where they could be used in the event of a conflict against North Korea to target either Pyongyang’s nuclear arsenal or other military targets, including large troop formations.

In fact, at times a majority of South Koreans have been in favor of the United States re-deploying tactical nuclear weapons to the Peninsula, and the U.S. House of Representatives recently asked the Pentagon to study the feasibility of such a move.

That being said, such a re-deployment almost certainly is not in the cards. For one thing, America and South Korea’s overwhelming conventional military superiority over North Korea is sufficient to deal with the military threat Pyongyang poses. In any case, America’s nuclear triad allows it to provide a nuclear umbrella from abroad.

As Moon Chung-in, an influential foreign affairs commentator in South Korea, who has served in a variety of governmental positions, told The Diplomat last year:

The U.S. has nuclear submarines; they have long-range bombers; they have intercontinental ballistic missiles on the U.S. mainland. They can use them easily. There is no reason for the U.S. to deploy tactical nuclear weapons here on the peninsula…. Practically speaking, the U.S. can hit targets anywhere, any time. Why would it deploy tactical nuclear weapons that require an additional cost to guard and protect.

Indeed, these were the reasons the United States decided to unilaterally withdraw tactical nuclear weapons from the Korean Peninsula in the first place, and the rationale only grows stronger as America’s nuclear arsenal becomes more advanced.

In any case, even if the United States did decide to re-deploy tactical nuclear weapons to South Korea, Beijing would not respond by sending the DF-31 intercontinental ballistic missile to Cuba for a number of reasons.

(Recommended: Russia Could Make China the Master of the South China Sea)

First, this would be inconsistent with China’s existing nuclear doctrine, which emphasizes no-first use and assured retaliation/minimal means of reprisal.

Second, although China would vigorously protest U.S. tactical nuclear weapons being stationed in the Asia-Pacific, they ultimately would not pose an especially serious threat to Beijing. Indeed, given their limited range, tactical nuclear weapons in say, South Korea, would be of dubious value in a U.S.-China conflict, which would most likely take place south of China in places like Taiwan or the South China Sea. In these instances, if the fight entered the nuclear realm, the United States would be better served by its existing nuclear options such as long-range bombers, nuclear-powered ballistic missile submarines, or even ICBMs.

Third, and in the same vein, stationing nuclear weapons in Cuba would be of dubious military value to China. While the DF-31 ICBM only has a range of 8,000 kilometers, which makes it more fitted for regional deterrence, the DF-31A has a range surpassing 11,000 kilometers. This gives it plenty of range to reach the western United States. Other Chinese ICBMs like the CSS-4/DF-5, while not road-mobile like the DF-31, have longer ranges that can reach almost the entire United States. Furthermore, China now has SSBNs equipped with the JL-2 submarine-launched ballistic missile (SLBM), further expanding the range of Beijing’s nuclear arsenal.

Accordingly, while stationing nuclear weapons in Cuba would prompt a crisis with the United States like it did in 1962, it wouldn’t provide any notable military value for China. This is in contrast to 1962, when the Soviet Union didn’t have the range to hold America under nuclear threat. Thus, for Moscow, deploying nuclear weapons in Cuba was a risky gambit with a valuable pay-off if it succeeded.