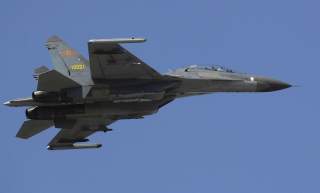 Chinese authorities, as well as sympathetic writers, have in recent months sought to deflect criticism of China’s island-building campaign in the Spratlys by insisting that Beijing is merely copying what other claimants have done for years. According to this narrative, every claimant is as guilty as Beijing of altering the status of features in the South China Sea in contravention of international law and escalating tensions. But this narrative is false. Unfortunately, in one recent case, poorly chosen messaging from Washington has only strengthened it.

China’s argument against the Philippines is the easiest to dismiss. No evidence has been offered to show that Manila has engaged in large-scale dredging or reclamation work, other than the expansion of a narrow strip of sand off Thitu Island years ago to allow for the construction of a runway. The Philippines has engaged in some reclamation to prevent erosion at features, just as all claimants have (and just as occurs at coastal and island beaches around the world). Most importantly, Manila has never attempted to create a rock or island from a low-tide elevation, as China has at three of the seven features it occupies. That is by far the most legally troubling, and most provocative of China’s actions.

Malaysia also engaged in reclamation work at Swallow Reef, on which it built an airstrip, luxury scuba diving resort, and small naval base in the 1980s. The natural rock or island was expanded from approximately 25 acres to 85 acres. That is admittedly substantial, but a drop in the bucket compared to the thousands of acres built by China in the last two years. And, as with Thitu Island, it is important to recognize that Malaysia construction did not seek to alter either the geographic or legal status of Swallow Reef.

Among the claimants, Vietnam presents the most tempting target for the disinformation campaign. It occupies the most features, much of that occupation is not well-documented, and the government in Hanoi has traditionally been more reticent than Manila to disclose details of its activities in the Spratlys. Worse, it clearly has engaged in reclamation work on some of its features, most obviously Sand Cay and West (London) Reef, though again, at a tiny fraction of the scale pursued by China. According to unverified Chinese sources, it has also done reclamation at Central (London) Reef, Grierson Reef, Namyit Island, Pearson Reef, Sin Cowe Island, and Southwest Cay.

In many of these cases, Vietnam clearly engaged in reclamation after the signing of the 2002 Declaration of Conduct for Parties in the South China Sea, thereby undercutting some (but not all) of its moral authority in saying China’s island building violates the spirit of the agreement. This is not helpful, and is precisely why Secretary of Defense Ashton Carter has called on all parties to refrain from further reclamation and construction, and did so during his meeting in Hanoi with Defense Minister Phung Quang Thanh. But again, key differences must be pointed out—Hanoi’s reclamation work has been a drop in the bucket compared to Beijing’s, and to date, there has been no documentation of Vietnam reclaiming a low-tide elevation or submerged feature to turn it into a rock or island. In other words, like the Philippines and Malaysia, Vietnam has engaged in reclamation or expansion, but not outright island building as China has.

Of late, the U.S. government has contributed to this muddying of the waters. While testifying before the Senate Foreign Relations Committee on May 13, Assistant Secretary of Defense David Shear noted that “Vietnam has 48 outposts; the Philippines, 8; China, 8; Malaysia, 5, and Taiwan, 1.” The fact that Vietnam had “48 outposts” was news to those who closely follow the South China Sea, both in the United States and in the region. In fact, it was more than twice what most experts cite as the number of features occupied by Vietnam. Many assumed Shear had misspoken, but then Secretary Carter repeated the figure in his speech at the Shangri-La Dialogue.

It didn’t take long for casual South China Sea watchers, and those more sympathetic to China’s position, to jump on the 48 figure as evidence that Vietnam has been the real aggressor. In The Diplomat, Greg Austin asserted that Vietnam has doubled the number of features it had occupied since 1996. What this and similar arguments overlooked is that Shear and Carter did not say that Vietnam occupies 48 features, they said that it has 48 “outposts.” For some reason, Washington decided to individually count every visible structure Vietnam has built on low-tide elevations and other features—something it never did for Chinese-occupied features before the island building campaign.

This means the U.S. government is counting Great Discovery Reef, for example, three times because Vietnam has built three different “pillbox” structures at different locations around the reef. Combined, those structures cover approximately 3.5 acres, with the two farthest from each other separated by about 5 nautical miles, and the two closest by less than 1 nautical mile. By comparison, China’s work at Fiery Cross Reef stretches about 2 nautical miles from end to end and covers 800 acres, with numerous facilities. Not only is this method of accounting for occupation in the Spratlys extremely misleading, but by not explaining its methods, Washington has helped fuel China’s false narrative.

If the long game for the Southeast Asian claimants, the United States, and like-minded nations is to rally international opprobrium against China in the hopes that Beijing will recognize the costs of its extralegal claims, then messaging that plays into China’s narrative of victimization is a sure way to lose.