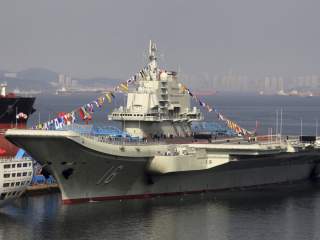 Unlike previous photos and video of Chinese carrier operations—the PLAN J-15 were painted in operational colors rather than flight-test schemes. Moreover, the aircraft were shown operating at dusk rather than just daylight hours. Nor was the carrier always sailing in calm seas—some of the operations were during inclement weather.

Further, many of the aircraft were shown launching and recovering onboard Liaoning loaded with inert weapons. Some of the jets were shown to be carrying a pair of active-radar guided PL-12 medium range air-to-air missiles and a pair of PL-8 short-range infrared-guided missiles. The PLAN also showed off its ability to launch and recover multiple jets quickly and its aircraft handling both above and below decks.

While it is no surprise that China has been making progress with Liaoning and its air wing, the latest images show the PLAN’s rapid progress in learning the art of carrier aviation. Indeed, Liaoning was always thought to be a training ship to be used in preparation for the arrival of China’s first indigenous carrier.

Work is continuing on China’s first indigenous carrier at the Dalian shipyard where Liaoning was refurbished. Not much is known about the new the Type 001A design, but it is likely to resemble the refurbished Russian-designed vessel or possibly the larger more sophisticated Ulyanovsk design—which was not completed before the collapse of the Soviet Union. However, current imagery seems to indicate a vessel that is similar in size to Liaoning.

The Pentagon’s 2015 annual report to Congress on Chinese military power states: “China also continues to pursue an indigenous aircraft carrier program and could build multiple aircraft carriers over the next 15 years.” Thus, we could be witnessing the beginnings of a powerful new Chinese carrier fleet.