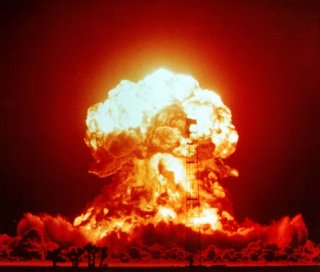 The United States claims that North Korea probably has secret nuclear facilities it is concealing from the world.

Last week, the U.S. State Department released its annual 2015 Report on Adherence to and Compliance With Arms Control, Nonproliferation, and Disarmament Agreements and Commitments. Under the section for the Democratic People’s Republic of Korea’s (DPRK) compliance on nuclear issues, Foggy Bottom claims there is a “clear likelihood” that North Korea is hiding some of its nuclear sites.

“The United States believes there is a clear likelihood of additional unidentified nuclear facilities in the DPRK,” the report says. It fails to elaborate. However, the statement is notable in that it did not appear in the same report last year, suggesting that the United States has uncovered new information over the past year that has raised suspicions about a possible secret nuclear facility.

North Korea does have a history of hiding nuclear facilities. For example, back in 2010 North Korean authorities revealed to a visiting delegation of U.S. academics that it had an operational uranium enrichment facility.

As the 2014 Report on Adherence and Compliance explained, “North Korean authorities stated that the enrichment facility contained about 2,000 centrifuges, which was consistent with the visitors’ observations, and that the facility was operating and producing low-enriched uranium (LEU), which the scientists could not confirm.”

Nonetheless, the United States continued to believe it was building up enrichment facilities, with the Director of National Intelligence reporting in 2007 that “We continue to assess with high confidence that North Korea has pursued efforts to acquire a uranium enrichment capability, which we assess is intended for nuclear weapons. All intelligence community agencies judge with at least moderate confidence that this past effort continues. The degree of progress toward producing enriched uranium remains unknown, however."

North Korea’s current nuclear facilities are mostly located at the Yongbyon research complex. Most notably, Pyongyang has a 5 MW(e), graphite-moderated reactor in the complex that it restarted in 2013. This allows North Korea to acquire fissile material for nuclear bombs by reprocessing weapons-grade plutonium.

Since at least 2010, North Korea has been building a Light Water Reactor (LWR) at the Yongbyon research complex. As the State Department notes in last week’s report: “provides North Korea with a justification to possess uranium enrichment technology that could potentially be used to produce fissile material for nuclear weapons.”

It is likely that the “unidentified nuclear facilities” the United States suspects North Korea of having relates to uranium enrichment, which would give North Korea another source of fissile materials to build nuclear weapons.

North Korea has conducted at least three nuclear tests since 2006, and some suspect if of conducting a secret test in 2010. It has yet to demonstrate an ability to produce miniaturized nuclear warheads that are small enough to fit on a missile, although many observers judge that it indeed has acquired the technical capability to do this.

Regardless, the six-party talks over North Korea’s nuclear program remain stalled, and Pyongyang has shown no willingness to dismantle its nuclear program as the United States, South Korea and much of international community demand.