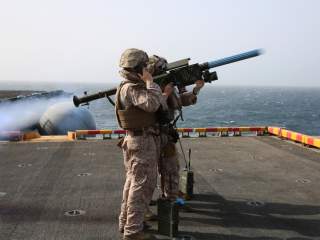 The Obama Administration has informed the U.S. Congress of a proposed $1.8 billion arms package for Taiwan, according to Capitol Hill sources.

The arms package—which is more modest than previous such deals—includes a host of weapons that could blunt an amphibious invasion by the People’s Republic of China (PRC). But the restrained scale of the deal is likely an attempt to avoid incurring Beijing’s wrath. China regards Taiwan as a breakaway province since the two sides were separated during the Chinese civil war that ended in 1950. The United States—while recognizing only one China—is legally bound to defend the island in case of military action by the mainland.

“The U.S. obligation to provide Taiwan with the weapons it requires for self-defense should not be subject to political considerations, including undue concern about offending sensitives in Beijing,” said Rep. Randy Forbes (R-VA), chairman of the House Armed Services Seapower and Projection Forces subcommittee and co-chairman of the Congressional China Caucus. “Instead, the process should be regularized to ensure that Taiwan is receiving weapons essential to its national defense without years-long delays in these important sales. These sales, coupled with vigorous military-to-military exchanges between the U.S. and Taiwan, are essential to sustaining the military balance in the Asia-Pacific and upholding regional stability.”

The U.S. arms package being offered to Taiwan includes the following items, according to Congressional sources:

• Two of the four surplus Oliver Hazard Perry-class (FFG-7) frigates that Congress authorized by law for transfer to Taiwan a year ago. Together, the ships will cost Taiwan $190 million to acquire and refurbish.

The U.S. State Department couldn’t immediately comment on the prospective deal by press time. But the only big-ticket items in the package are the two frigates, which would boost some of Taiwan’s capabilities. The addition of the Javelins and TOW missiles would make life very difficult for Chinese armor while the Stingers would pose a serious threat to People’s Liberation Army rotary-wing assets and other low-flying aircraft. Meanwhile, the U.S.-provided networking hardware would improve coordination with the American forces in the region in the event of a war.

In all, the proposed arms package is far more modest than previous such deals—and the drop off comes as Chinese forces grow ever more capable. Indeed, no weapon included in the package would seriously even the balance of power across the Taiwan Strait, which has steadily tipped in Beijing’s favor in recent years.

The previous U.S. arms package included upgrades for Taiwan’s Lockheed Martin F-16 fighters to the latest standards, among other items. But that package also included a promise to supply new diesel-electric attack submarines—which the United States does not manufacture and, ultimately, those vessels were never delivered.