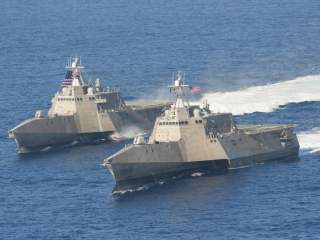 Secretary of Defense Ashton Carter has ordered the U.S. Navy to truncate the Littoral Combat Ship (LCS) program and invest the money into more aircraft and additional destroyers. But not everyone is happy with Carter’s decision.

“For the last several years, the Department of the Navy has overemphasized resources used to incrementally increase total ship numbers at the expense of critically-needed investments in areas where our adversaries are not standing still,” Carter wrote in a Dec. 14 memo addressed to Navy Secretary Ray Mabus. “This has resulted in unacceptable reductions to weapons, aircraft and other advanced capabilities that are necessary to defeat and deter advanced adversaries.”

According to the memo, Carter is directing the Navy to pick one of the two LCS designs for continued production. The total number of ships built would be reduced from fifty-two to forty—which matches the service’s stated warfighting requirements. Carter’s directive applies to both the current LCS and the more heavily armed future frigate derivative of the vessels.

In lieu of additional LCS ships, the Navy is instructed to redirect the money towards funding for ten additional Arleigh Burke-class destroyers in the next five-year defense plan. The Virginia Payload Modules for the Navy's submarine fleet and more Standard SM-6 expanded range surface-to-air missiles are also named as new destinations for the rerouted funds.

Carter’s memo received a tepid reaction from Capitol Hill. “Secretary Carter has framed this as a choice between capability and capacity, but the undeniable reality is that our Navy needs more of both—and our military needs the top-line budget to make that a reality,” said Rep. Randy Forbes (R-VA), chairman of the House Armed Services Seapower and Projection Forces subcommittee.

Meanwhile, Jerry Hendrix, director of the Defense Strategies and Assessments Program at the Center for a New American Security, said that the decision caught him by surprise. “I agree we need a single design for stable production, but we need the full buy to increase the size of the fleet,” he said. “This memo shows that Carter is prepared to sacrifice presence in some parts of the world for high-end warfighting capability.”

Hendrix added that Carter’s decision to focus on high-end warfighting capability over presence is a mistake. In many parts of the world, private military corporations are starting to pop up to provide the kind of security that has traditionally been the purview of the U.S. Navy and the British Royal Navy before it. Hendrix said that the primary purpose of the LCS is to deter wars by showing American presence in a region. “Presence deters potential aggressors so you don’t end up in a war where you need those high-end ships,” Hendrix said.

Analyst Bryan McGrath, managing director of the naval consultancy, The FerryBridge Group, weighed the issue from both sides. “As a Seapower advocate, I find myself rejecting the false choice between deterrence and war-fighting. The fleet must be balanced for both, and the rhetoric coming from OSD leads one to believe that budgetary restrictions have caused them to unbalance the Navy program with a thumb on the scale of warfighting,” McGrath wrote in Information Dissemination. “The nation can afford both, and the case must be made to ensure that the Navy receives the resources to do both. But that is not the budget environment we are in today, and so the consultant in me sees rationality and coherence in the OSD position.”

Bryan Clark, a senior fellow with the Center for Strategic and Budgetary Assessments, said that the Navy comes out ahead under Carter’s plan. “This decision, overall, can be seen as being good for the Navy," he said. "In addition to the funding made available by the truncation of LCS, the SECDEF memo notes that the FY17 budget adds almost $2 billion in new funding to the Navy's procurement accounts to buy and accelerate new capabilities such as SM-6, electronic warfare systems and Aegis upgrades that the Navy needs to defeat anti-access threats and contribute to deterring high-end competitors such as Russia and China." Such a plan is consistent with SECDEF's ‘Third Offset Strategy, Clark added.

“Although the Navy loses a few LCS in the five-year defense plan from FY17-21 with this decision, it will come out of it with better capabilities," Clark explained, pointing out that the next president could add more frigates in the future. "The Navy should try to position itself for that possibility by reevaluating their planned frigate design to make it more survivable and capable,” he said.

One option that the U.S. Navy should consider is buying the Saudi Arabian version of the Lockheed Martin LCS design, Clark said—which is something Hendrix also called for. “One scenario that could work out relatively well for the Navy and the shipbuilders would be for the frigate to be the LCS-1 (Freedom-class) variant, built by Marinette Shipbuilding,” Clark said. “It could potentially leverage the investment Saudi Arabia plans to make in developing a frigate based on the LCS-1 design to upgrade the U.S. Navy frigate with VLS [vertical launch system] cells so it can be more capable for air defense and carry a wide range of offensive weapons.”

While down-selecting to the Lockheed LCS design would be a bitter pill to swallow for many Congressmen and Senators, the Navy might be able to redirect work to those shipyards in the form of other projects. “Congress could possibly add one or more Expeditionary Fast Transports (EPF)—formerly JHSVs—to the shipbuilding plan to provide work for Austal Shipbuilding, which builds the other LCS variant and would otherwise not have work after the FY18 LCS is constructed,” Clark said.