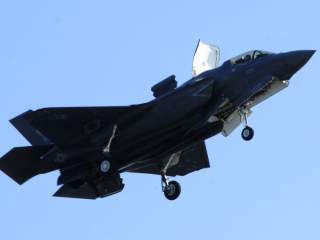 Turkey has started construction of a new amphibious assault ship that will be able to carry the stealthy Lockheed Martin F-35B Joint Strike Fighter. When completed, it could help project Ankara’s power into the Black and Aegean Seas, challenging Russian and Greek maritime influence.

The new vessel, which is being named TCG Anadolu, is expected to be completed by 2021. Anadolu will be roughly 740 feet long and 105 feet wide with a displacement of 28,000 tons. It will have a maximum speed of twenty-one knots.

But the perhaps the most important feature is a 12-degree ski-jump, which might eventually be used to launch the short take-off/vertical landing version of the F-35, according to the Turkish daily Milliyet. The amphibious assault ship is also being designed to host eight Bell-Boeing MV-22 Osprey tilt-rotors—making the ship comparable in capability—but not capacity—to an American Wasp-class Landing Helicopter Dock (LHD).

Indeed, like U.S. amphibious assault ships, Anadolu will carry an amphibious 700-man strong infantry battalion and a total of 1,400 crew of onboard. The ship’s well deck can accommodate four Landing Craft Mechanized (LCM) or two Landing Craft Air Cushion (LCAC) hovercraft. It can also carry thirteen tanks 13 tanks or twenty-seven Amphibious Armored Vehicles (AAV). It will also have a hospital facility onboard.

The development of the new vessel will give Turkey some long-range maritime power projection capability. Indeed, the Milliyet reports that Turkey hopes to project power into the Aegean, Black Sea and Mediterranean in the theater with the new ships. But longer term, Ankara hopes to use the new ship to push into the Indian Ocean and even the Atlantic Ocean. Under its current leadership, Turkey sees itself as a nascent great power. It’s not clear how many ships Turkey will ultimately build.

While Turkey is building Anadolu, Ankara has not formally signaled to Washington that it wants to buy the F-35B jump-jet or the Osprey. However, Turkey is a partner on the Joint Strike Fighter program. Even if Turkey does not buy either aircraft, Ankara has plenty of helicopters that could operate from the new flattop. Only time will tell.