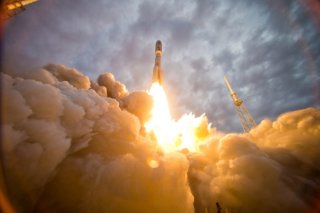 The U.S. Air Force appears to have formulated the perfect plan for wrecking the already struggling domestic space launch business. Take a sector that has struggled for years with too little demand to create an efficient launch program, add new entrants to further divide the market, force everyone to compete based on price and not safety for launch services, allow the participants to create improbable plans for future launch vehicles – some based on unproven propulsion technologies – and tie your primary launch services provider to the purchase of Russian rocket engines that could be cut off at any moment.

Things were dicey enough when Space-X entered the list, competing with the then-monopoly launch services provider, United Launch Alliance (ULA), for access to military and national security payloads. At least ULA had an unparalleled record of 100 successful launches in a row. Its major failing was that it was using relatively old technology of which a critical part, the first stage rocket motor for its Atlas V heavy lift rocket, was the Russian-built RD-180 motor.  Vladimir Putin could cut off ULA access to engines for reasons of state or even personal pique. SpaceX, with a modest record of success, sped through the certification process to enable it to launch some payloads on its Falcon 9 booster. Its idea for a heavy lift vehicle that would compete with the Atlas V is the Falcon 9 Heavy which would rig together 27 rocket motors to get the desired lift. Unlike the Atlas V, the Falcon 9 Heavy has not even left the drawing board stage yet.

Apparently, the U.S. Air Force didn’t think this was risky enough for the launch services business or this country’s assured access to space.  After begging Congress for the right to buy additional RD-180s, the Air Force reluctantly sponsored several companies’ efforts to develop an alternative first stage system for the Atlas V.  One was Aerojet/Rocketdyne, a long-time builder of rocket motors whose plan was to design and build in the shortest time possible a conventional replacement for the RD-180, one that is fueled by an oxygen/kerosene mix that is well understood by all. The other was Blue Origin, a company bankrolled by Jeff Bezos. Blue Origin’s engines are powered by methane, a fuel never used before at the proposed levels of thrust. To make it even more complicated and risky, ULA now wants to put the new engine, whichever company provides it, on an entirely new launch vehicle adding further cost and risk to the entire proposition.

Now, the Air Force has decided to further complicate the process and virtually destroy the business case for every current competitor in the launch services sector.  The Air Force has decided to support a proposal by Orbital ATK and L-3 Communications to provide yet another launch vehicle. This one would use excess Minuteman intercontinental ballistic missile boosters to provide the primary rockets for a capability to launch relatively small commercial payloads. In theory, private launch service providers would bid for the right to buy excess Minutemen.

The nation is on the ragged edge of losing its ability to maintain assured access to space. In fact, ULA recently refused to bid on a contract to launch a national security payload claiming it had committed its entire stockpile of RD-180s to other customers. The use of excess Minuteman rockets and engines would depress launch prices and undercut any effort to sustain a domestic solid rocket motor industrial base. Such a move will drive current players out of the game as the demand for their products dwindles. Once the backlog of excess Minutemen was used up, U.S. satellites would either sit on the ground or their owners would have to contract with foreign launch service providers.

It should be pointed out that this latest scheme not only contradicts a longstanding U.S. government policy of promoting the development and health of the domestic commercial space launch industrial base but also U.S. laws. When Russia and the U.S. tried the same stunt after the collapse of the Soviet Union, it pretty much drove U.S. commercial small satellite launch service providers out of the business.

Let’s tally up the Air Force’s recent moves. First, it insists it must depend on Russian rocket engines for at least another six years. Then it wants to take the high risk approach of launching important national security payloads aboard either the Space-X system that has never been tried in such a mode or a new launch vehicle using a novel propulsion system. Finally, it wants to devastate what little remains of the U.S. rocket motor industrial base by selling off its stash of surplus Minuteman boosters.

Wouldn’t it be simpler for the Air Force just to blow up Vandenberg and Cape Canaveral launch sites? The Air Force could save billions. Of course, the United States would no longer have assured access to space but that’s the path the Air Force seems to be on anyway.