Exposed: Why Is Britain's Military Back in the Pacific? 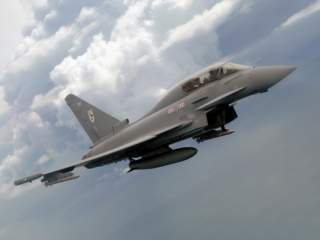 While the sun may have set on the British Empire, the United Kingdom is once again ramping up its presence in Asia with the announcement of new military cooperation with Japan. The renewed British focus on the region comes even as London makes efforts to build greater economic ties with Beijing.

According to the UK Ministry of Defense (MOD), the British would like to increase defense industrial cooperation with Japan. The UK also wants to pursue joint exercises with Japan—which could include a 2016 Royal Air Force (RAF) deployment of Eurofighter Typhoon air superiority fighters to the island nation.

“Japan is our closest security partner in Asia and I want to significantly deepen defense cooperation between our two nations,” British defense secretary Michael Fallon in a Jan. 8 statement. “We will do that through joint exercises, reciprocal access to our military bases, military personnel exchanges and cooperation on equipment, including a new air-to-air missile.”

Britain and Japan are most interested in cooperating on cyber-warfare and developing a new long-range air-to-air missile that would be a generation ahead of the MBDA Meteor or the AIM-120D AMRAAM. The aging AMRAAM—which is used by both countries—is soon going to be outranged by China’s PL-15 and is very vulnerable to enemy digital radio frequency memory jamming.

“Following the success of the first round of talks on the Co-operative Research Project on the Feasibility of a Joint New Air-to-Air Missile (JNAAM), the Ministers confirmed discussions would move to the second stage,” the MOD statement read. Japan has also had some discussions with U.S. defense officials and industry about developing an AMRAAM successor.

On the cyber-warfare front, Japan and Britain are strengthening information sharing and cooperation. “It was also confirmed that the two nations intend to conduct a joint research project in 2016 with UK-U.S.-Japan military cyber analysts and are aiming to conduct joint cyber exercises with Japan,” the MOD statement reads.

The British government also believes that it could also cooperate with Japan on mine hunting, improving amphibious capability and improving counter-Improvised Explosive Device capabilities. The UK also welcomes increased Japanese participation in NATO exchanges and joint exercises, the MOD stated.

At the same time, the British government affirmed its support for Tokyo’s recent efforts to reinterpret its pacifist constitution to permit a wider definition of self-defense. “The UK welcomed Japan’s recent Legislation for Peace and Security, and supported Japan playing a more proactive role in securing global peace, stability and prosperity through its policy of ‘Proactive Contribution to Peace’ based on the principle of international cooperation,” reads the MOD statement.

The Japanese, for their part, expressed their relief that Britain is once again playing a more active role in the Asia-Pacific region.

“Last year, the UK published the SDSR [Strategic Defense and Security Review]. In this, the UK reaffirmed its commitment to its presence as a global power,” said Japanese minister of defense Gen Nakatani in a statement. “The SDSR highlighted Japan as the closest security partner in Asia, and I highly regard this statement. In the same year, we have reformed our legislation concerning peace and security. Through these processes, our two nations have confirmed the further commitment of the stability of the world.”

It’s not clear how China will react to the news of this cooperation, but given the antipathy between China and Japan, it is not likely to be openly welcomed.