Extending the Range of the U.S. Navy's E-2D Advanced Hawkeye 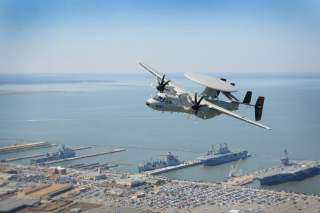 The new capability, which will be eventually be retrofitted onto the U.S. Navy’s entire E-2D fleet, will greatly increase the range and endurance of the Advanced Hawkeye. That is particularly important as the United States focuses more on the Asia-Pacific region, where the vast distances over the Pacific are increasingly forcing the navy to look for way to extend the reach of its carrier air wings.

“Passing fuel for the first time airborne is a significant milestone in the development of this critical technology for the E-2D, which increases the range and persistence of command and control the E-2D provides to U.S. and allied forces,” Capt. Keith Hash, E-2/C-2 Airborne Tactical Data Systems (PMA-231) program manager, said in a statement.

According to Northrop Grumman and the U.S. Navy, the first E-2D equipped with aerial refueling successfully received its first in-flight fuel transfer from a tanker aircraft on July 14. “During the four-hour flight, the pilots performed 10 dry plugs and two wet plugs, resulting in the successful transfer of more than 1,700 pounds of fuel from a U.S. Navy KC-130 Hercules to the E-2D Advanced Hawkeye,” reads a Northrop Grumman statement.

According to Northrop Grumman, there are two additional aircraft in the aerial refueling test program, which is part of U.S. Navy contract awarded to the company in 2013. All newly built E-2Ds will start to receive the aerial refueling systems modifications starting in 2018. Older aircraft already serving in the fleet will be retrofitted. The new system is set to become operational in 2020.

That would include aircraft like the Chengdu J-20, Shenyang J-31, Sukhoi Su-57 PAK-FA and, indeed, the United States’ own Lockheed Martin F-22 Raptor and tri-service F-35 Joint Strike Fighter. Only very large stealth aircraft without protruding empennage surfaces—like the Northrop Grumman B-2 Spirit or the forthcoming Long Range Strike Bomber—can meet the requirement for geometrical optics regime scattering. Effectively, that means the E-2D’s AN/APY-9 radar can see stealth aircraft like the J-20 or J-31.

Moreover, the APY-9 would also act as a sensor to guide Raytheon Standard SM-6 missiles launched from Aegis cruisers and destroyers against targets located beyond the ships’ SPY-1 radars’ horizon via the Cooperative Engagement Capability data link under the NIFC-CA “From the Sea” (FTS) construct. In fact, the navy has demonstrated live-fire NIFC-CA missile shots using the E-2D’s radar to guide SM-6 missiles against over-the-horizon shots—which by definition means the APY-9 is generating a weapons quality track.