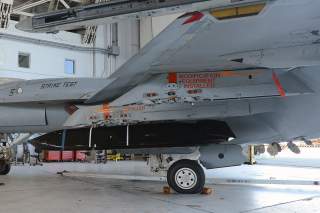 The Navy and Lockheed Martin have now released a next-generation missile from an F/A-18 and are looking at a variant of the LRASM missile that fires from a deck-launcher on a ship.

The Navy has released its emerging Long Range Anti-Ship Missile from an F/A-18 Super Hornet, marking a new milestone in the development of a next-generation, long range, semi-autonomous weapon designed to track and destroy enemy targets - firing from aircraft and ships.

The test involved a "jettison release" of the first LRASM from the Super Hornet, used to validate the aerodynamic separation models of the missile, Lockheed developers said. The test event was designed to pave the way for flight clearance to conduct captive carry integration testing scheduled for mid-year at the Navy Air Weapons Station, China Lake, California.

"The first time event of releasing LRASM from the F/A-18E/F is a major milestone towards meeting early operational capability in 2019," Mike Fleming, Lockheed Martin LRASM program director, said in a written statement.

Navy officials told Scout Warrior that the service is making progress with an acquisition program for the air-launched variant of LRASM but is still in the early stages of planning for a ship-launch anti-ship missile.

Alongside the preparation of LRASM as an "air-launched" weapon, Lockheed Martin is building a new deck-mounted launcher for the emerging  engineered to semi-autonomously track and destroy enemy targets at long ranges from surface ships.

The Navy will likely examine a range of high-tech missile possibilities to meet its requirement for a long-range anti-ship missile -- and Lockheed is offering LRASM as an option for the Navy to consider.

A deck-mounted firing technology, would enable LRASM to fire from a much wider range of Navy ships, to include the Littoral Combat Ship and its more survivable variant, called a Frigate, Scott Callaway, Surface-Launched LRASM program manager, Lockheed Martin, told Scout Warrior in an interview last year.

Part of the rationale to move back toward open or “blue water” combat capability against near peer competitors emphasized during the Cold War. While the strategic and tactical capability never disappeared, it was emphasized less during the last 10-plus years of ground wars wherein the Navy focused on counter-terrorism, counter-piracy and things like Visit Board Search and Seizure. These missions are, of course, still important, however the Navy seeks to substantially increase its offensive “lethality” in order to deter or be effective against high-tech adversaries.