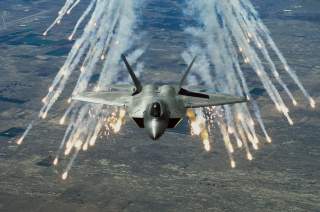 Next month, the United States Air Force will once again host a massive international wargame with the British Royal Air Force and the French Armée de l'Air (AdA).

The point of the exercise is to foster interoperability between advanced fifth-generation stealth fighters—such as the F-22 and F-35—and fourth-generation jets—such as the Typhoon, Rafale and F-15E—against the highest-end threats. Moreover, combined exercises such allow America’s most important allies to train together in a realistic combat setting against a peer-level adversary.

“Although we have fought alongside each other for decades in the Middle East and elsewhere, this exercise will give us an opportunity to refine our skills and ‘night-one’ interoperability against a high-end threat,” Col. Peter Fesler, commander of the 1st Fighter Wing said.

The key to refining those skills is to train against the most difficult possible threats the three allies might face under realistic conditions. As such, the F-15Es will primarily be tasked with providing a realistic presentation of the most advanced enemy aircraft—such as advanced versions of the Sukhoi Su-30 Flanker—that the NATO alliance might face. Northrop T-38 trainers flown by the 1st Fighter Wing’s 71st Fighter Training Squadron will back up the Strike Eagles in providing “Red Air” support. The exercise will also include advanced surface-to-air missile threats that the friendly Blue Force will have to defeat.

“Atlantic Trident 17 is designed to further the development and sharing of air combat TTPs [tactics, techniques and procedures] with our French and U.K. partners,” Fesler said. “To accomplish this, we will train together against a range of potential adversaries and threat systems.”

Some of the British Typhoon aircraft have already arrived at Joint Base Langley-Eustis in Virginia—which is the 1st Fighter Wing’s home base—for some preliminary training. The remaining British jets will arrive by April 15. The French, too, will have arrived by then.

The National Interest expects to cover the exercise on site later in April. Stay tuned.