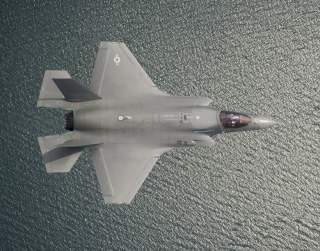 The Danish fighter competition is over, it would seem, as the parliament has officially approved a program for 27 F-35 Lightning IIs. As I noted last week, the purchase price remains indeterminate, so the Danish Defense Ministry may be seriously unprepared for the final bill, if it’s really taking seriously the source-selection team’s calculations. As I wrote earlier this week, it's hard to see how F-35As will cost to procure and fly than F-18Es. In Canada, the Trudeau Government seems sharply opposed to the F-35, strongly preferring the F-18E, and largely on cost. In the long run, though, it’s just possible that pursuit of the Joint Strike Fighter could be a low-cost option for air forces. Seriously—read on.

As recently as this May, the Canadian Department of National Defence may have been wondering whether the F-18E would even be available. That’s one reason why Ottawa is moving quickly. In Defense News earlier this week, David Pugliese reported that the Trudeau Government had decided to buy Super Hornets as an “interim” replacement for the plain-old-older Hornets. Competition would be pushed off to the mid-2020s, and participation in the JSF program preserved. That stratagem follows the approach of that other Commonwealth realm, Australia, in its interim purchase of F-18Es, Fs, and Gs. If the plan sticks, it may prove a politically deft move that sidesteps Canada’s very strict federal statutes on competition in contracting. The F-35, the prime minister asserted to the Commons this week, is “an aircraft that does not work and is far from working,” so an emergency purchase under emergency rules is essential to keep the RCAF flying. And to be fair, the Harper Government did similar things to keep the Canadian Army in good shape in Afghanistan.

A Canadian Super Hornet deal still could pose a challenging industrial problem for the manufacturer. As Byron Callan wrote for Capital Alpha this week, if the RCAF needs a squadron set of perhaps 20 F-18Es, “the trick for Boeing would be to make these aircraft available in the 2018-19 timeframe in order to retain an annual build rate in the low-to-mid-twenties.” That would be enough to maintain a credible commitment to NORAD as Canada’s least airworthy CF-18As retire. As the Liberals’ held during the recent federal elections, “the primary mission of our fighter aircraft should remain the defence of North America, not stealth first-strike capability.” In the near term, keeping Tupolevs from flying in over the Arctic requires some range and perhaps a long-range missile. Low-observability may be optional—for now.

That gets back to capabilities. As I described it back in 2010, the F-35 is something of a flying antenna, whose electronic capabilities may provide its single pilot with great awareness of his battle space. As I wrote, it may also prove “a great stand-off interceptor, with its electronically scanning radar, infrared tracker, and [eventually pair of] AMRAAMs”. The Stillion Thesis holds that sensors and missiles will matter more than dogfighting skill and maneuverability, so seeing and shooting first may be not just important, but essential, for success in aerial combat. Could a future Russian bomber wander over Canada with its own long-range air-to-air missiles? That big target might also bring a really big radar, perhaps affording the intruder that critical first shot.

This is why Colonel Alex Grynkewich, who heads the USAF’s Air Superiority 2030 project, told Lara Seligman of Defense News in April, it’s not clear that the next fighter jet will be a fighter per se. Whatever it is, it will be stealthy and sensing, unless the requirements-writers get past what Colonel Mike Pietrucha called, in a March and April two-part series for War On The Rocks, “the Air Force’s overcommitment to stealth.” He so writes because there's already considerable concern that the F-35 will have difficulty penetrating Russian and Chinese ground-based air defenses, stealth or not. If low observability does remain important—and I have wondered about this too—then it’s important to note that the F-35 is only really radar-evading when carrying a light load. The airplane's clean lines are ruined by external stores. Thus some of the F-35’s proponents have been arguing that the close-in work of penetrating enemy defenses, or firing volleys of missiles at ingressing enemies, should be undertaken by robotic “trusted wingmen,” commanded by F-35 pilots through those extensive electronics suites. Numbers have a way of complicating enemies’ plans, and you can’t quite do that manned-unmanned thing without fully-networked assets.

Looking at the problem from the constraints, this is why Byron Callan of Capital Alpha has written that one of the possible “outcomes for military aviation shortfalls” is supplementing these now more-expensive manned fighters with drones. It's a view espoused just today by Dan Gouré of the Lexington Institute in his call for a new high-low mix for the Air Force, to include manned and unmanned turboprop attack aircraft. Earlier this week, David Axe wrote that “instead of buying more than 1,700 identical F-35s over a period of 30 years,” the USAF might consider more frequent updates of electronics and weapons to the “same fuselage, wings, and engines”—and of course lots of drones. If that’s the future, then surrounding a few expensive manned jets with lots of less-expensive unmanned ones could prove the lower-cost option.

Will this alternative, Workian way of manned-unmanned war work against first-rate opponents? Maybe it won’t, and the USAF will be hoist by its own autonomous petard. Maybe it could, but the Canadians and Dutch will never buy into flying killer robots. Maybe it will be absolutely essential in a 21st-century, Third Offset sort of way. It’s hard to know, as flying forces are only beginning to work out the doctrines, operating concepts, technical architectures, and legal authorities needed to make it possible. But it will certainly provide proponents of F-18s, F-35s, and almost anything else a great set of marketing slides for the next sales pitch.