F-35 Pilots Not Happy to Perform A-10 Comparison Tests 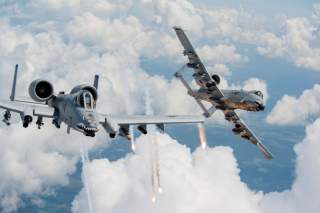 J. Michael Gilmore, the U.S. Defense Department’s top weapons-tester,confirmed on April 26 that the Pentagon will conduct a head-to-head test of a new F-35 stealth fighter and an old A-10 attack jet in the close-air-support mission.

Critics of the high-tech, budget-busting F-35 and fans of the tried-and-true A-10 — a rugged, purpose-built ground-attack plane — applauded the announcement.

But at least one person is not pleased. Lt. Col. Joshua Wood, an F-35 pilot and the commander of the U.S. Air Force’s 422nd Test and Evaluation Squadron at Nellis Air Force Base in Nevada — the unit responsible for developing new tactics for the F-35, A-10 and other front-line Air Force fighters — told Combat Aircraft that the test will not be helpful.

“You run the risk of drawing unrealistic conclusions,” Wood told reporter Steve Davies, who has done excellent work on the 422nd TES and F-35 tactics.

Wood stressed that it was not up to him to decide whether there would be a test. “Dr. Gilmore is the quality assurance check on the military’s acquisition system,” Wood said. “With that in mind, he wants that comparison” between the F-35 and the 1970s-vintage A-10.

Actually, Congress more than anyone else wants the comparison. Lawmakers have repeatedly blocked the Air Force from retiring its roughly 300 A-10s in order to free up a few billion dollars for F-35s.

Wood’s problem with the F-35-versus-A-10 test, he told Davies, is that the two planes — one, single-engine, fast and flimsy; the other twin-engine, slow and sturdy — are too different for a direct comparison. “What I would say is that it’s very important to compare apples to apples.”

“When you try to have a comparative analysis of a single-mission platform like the A-10 against a platform like the F-35, which is fundamentally designed from the ground up to do something completely different,” Wood added, “you run the risk of drawing unrealistic conclusions.”

Citing War Is Boring’s summer 2015 publication of a leaked test report describing a mock dogfight between an F-35 and a much older F-16 — a trial in which the nimble F-16 performed much better than the more sluggish F-35 did — Wood continued:

“Take [basic fighter maneuvers], for example. You fly off a ‘clean’ F-16 against a ‘clean’ F-35 — who will win? That’s a difficult question to answer. In some parameters, the F-16 is going to dominate. It’s a day [visual flight rules] fighter that can turn inside its own butt.”

By contrast, Wood said, “the F-35 was built with stealth to be able to go places that no one else can go and to be lethal without anyone seeing it. Those are two very different design points. So, what if I draw a conclusion that the F-35 can be [out-maneuvered] by the F-16 — therefore the F-16 is better? Hmmm. Well, let’s throw in a couple enemy [surface-to-air missiles]. Then let’s see how the F-16 by itself does.”

“In other words,” Wood concluded, “you can design tests if you have inside knowledge to showcase strengths and weaknesses and abuse them to your own bias if you wanted to do a disingenuous comparative analysis.”

To be clear, Wood’s squadron — which works for Air Combat Command — will not be the one conducting the F-35-against-A-10 trial. That job belongs to the Air Force Operational Test and Evaluation Center, which works for the overall Air Force.

But Wood offered what could turn out to be a preview of the test’s result — that both the F-35 and A-10 can do close air support. But they would do it differently, especially against a well-armed foe with radars and air-defense missiles.

The slow, non-stealthy A-10 flies very low — down to 100 feet — in order to avoid detection by enemy sensors. “A-10 guys don’t like radar threats,” Wood said. “We enjoy the tactics that they force, being down at 100 feet, but when you pop over that ridgeline and you’re exposed, you are just sitting there trundling towards the target thinking, ‘Don’t find me. Don’t find me. Don’t find me. Okay, good. Bombs are off. Let’s get the Hell out of here.’”

With its speed and stealth — especially compared to the A-10 — the F-35 can come in high. “I am able to locate and plot the threat relative to the target and can assess whether an attack is tactically feasible or not. If it is, I can take out the target without the threat knowing I’m there and egress without being targeted.”

Likewise, while the A-10 carries more than a thousand rounds of ammunition for its powerful 30-millimeter cannon, the F-35 carries just 181 rounds for its own 25-millimeter gun. So the A-10 can shoot its gun in support of ground troops, but the F-35 might rely more on small, precise bombs.

That doesn’t worry Wood. He cited statistics from Afghanistan that show that a wide range of aircraft — including bombers that don’t even have a gun — have flown close-air-support missions. “Day after day, we’ve executed CAS with zero rounds.”

This story originally appeared in War is Boring