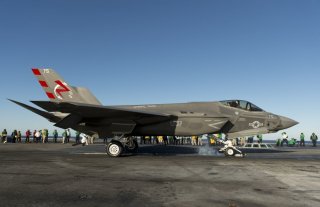 The F-35 Program Office and Lockheed Martin really want Congress to approve an F-35 block buy of more than 460 planes. They claim the plan would save taxpayers approximately $2 billion over the three-year deal. Recent reports from the Government Accountability Office and the Director of Operational Test and Evaluation cast doubts on such claims, however. The GAO estimates it will cost $1.7 billion to upgrade aircraft purchased before the plane is fully developed to incorporate later design features. So by buying underdeveloped planes, we would cancel out most of the expected savings.

DOT&E strongly warned Congress against a block buy at this point, citing both the immaturity of the technology and the amount of testing yet to be completed. The DOT&E annual report noted that a block buy would not be consistent with laws in place for multi-year procurement, and asked, “would such a ‘block buy’ be consistent with the intent of Title 10 U.S. Code, which stipulates that [initial operational testing] must be completed and a report on its results provided to Congress before committing to Full-Rate Production—a commitment that some could argue would be made by executing the ‘block buy?’”

I asked General Bogdan about this after he testified before the Senate Armed Services Committee recently. He explained the differences between a block buy and a multi-year purchase agreement, saying the former doesn’t commit the government to purchasing a set number of aircraft the way a multi-year purchase agreement would; it just allows contractors to purchase production materials in bulk and the government gets the savings that result. When I asked about the timing of the plan, specifically trying to lock down the deal before IOT&E even starts, he said there is no legal requirement for IOT&E to be complete before a block buy can begin. You can hear the three minute exchange here:

The block buy versus multi-year contract discussion may seem like inside baseball, but the difference is important for taxpayers.

Federal law allows agencies to use multi-year contracts to purchase government property so long as certain criteria have been met. Congress typically authorizes most weapons buying programs on a year-by-year basis to ensure proper oversight and to maintain incentives for the contractor to satisfactorily perform. According to Title 10 U.S.C., Section 2306b, for a program to be eligible for multi-year procurement, the contract must promote national security, should result in substantial savings, have little chance of being reduced, and have a stable design. The F-35 seems to be failing at least two of the first three criteria and is most certainly is failing the fourth. And as the 2015 DOT&E report shows, the operational testing that needs to take place in order for an informed final production decision will not be completed until 2022.

So while multi-year contracts at least afford some protections to the taxpayers block buys provide significantly fewer protections for taxpayers. As a Congressional Research Service report points out, block buy contract savings can be lower than those promised under multi-year procurement, and are not governed by any precautionary statutory requirements.

No matter how F-35 officials try to spin the argument, buying more F-35s at this point is a bad deal for both the men and women who will take them into harm’s way and for the American people who have to foot the bill.

This piece first appeared on the POGO Center for Defense Information website here.