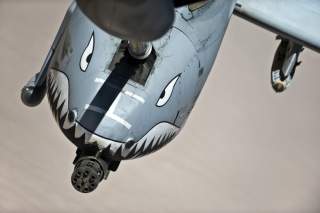 These, and many more, are among factors now being analyzed as proponents of both the A-10 Warthog and F-35 Joint Strike Fighter assess their respective abilities to perform the crucial and highly valued Close Air Support mission. The Pentagon and the Air Force are now conducting a thorough examination of each plane's capability for this role - including extensive analysis, simulated tests, flights of both aircraft under combat-like conditions and a range of tests, Air Force and Pentagon officials have explained. While many of the details of the ongoing evaluation are not now being discussed publically, the results are expected to bear prominently upon the visible ongoing debate regarding the future mission scope of both the A-10 and the F-35.

While the cherished A-10 is unambiguously combat-tested in the role of Close Air Support, some F-35 advocates have mused that the JSF sensors, maneuverability, high-tech computers and arsenal of weapons just might better position the 5th generation aircraft for the mission; at the same time, the A-10s titanium frame, built-in redundancy, famous nose-aligned 30mm cannon and wide-ranging precision-weapons envelope make clearly make it the best choice for close air support.