F-35 vs. Eurofighter Typhoon: Which Fighter Will Dominate? 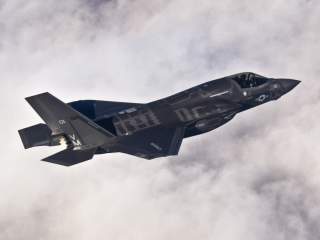 The British Royal Air Force (RAF) and Royal Navy personnel are being embedded with the U.S. Marine Corps as the United Kingdom gears up to start operating the Lockheed Martin F-35B Joint Strike Fighter in numbers.

The British—who are operating alongside the USMC’s VMFAT-501 training squadron—are part of 617 Squadron, which is nicknamed the “Dambusters” because of its exploits during WWII. The squadron will build up its strengths in the number of pilots, maintainers and other personnel at Marine Corps Air Station Beaufort, South Carolina, before returning to RAF Marham in Norfolk, reports the Daily Mail.

Great Britain—which is the only Level 1 partner on the U.S.-led stealth fighter program—is expected to buy 138 F-35 short takeoff vertical landing (STOVL) aircraft to be operated by the RAF and Royal Navy. The stealthy new jets will not only fly from land bases, but will also fly from two new British aircraft carriers.

The F-35Bs will also operate alongside Britain’s fleet of Eurofighter Typhoons. Indeed, the RAF plans to operate 107 upgraded Typhoons into the 2030s alongside the F-35. As with the U.S. services, the U.K. will use the fourth-generation air superiority fighter alongside the stealthy F-35. Basically, the F-35 will act as a flying sensor node while the Typhoon will be a flying missile magazine when taking on threats inside heavily defended airspace.

The RAF’s Typhoons and French Air Force Rafales training alongside the U.S. Air Force’s Lockheed Martin F-22 Raptors at Joint Base Langley-Richardson, Virginia, to learn how to better coordinate fourth and fifth-generation fighters. While the Raptor is essentially a dedicated air superiority fighter, the F-22 and F-35 are similar in many ways. Thus, many of the lessons learned can be carried over to joint F-35/Typhoon operations.

While the Typhoon and the F-35 won’t be competing with each other directly in the British service, the manufacturers are nonetheless engaged in a dogfight to secure sales. In that arena, the Typhoon—despite its superior aerodynamic performance—is slowly being edged out by the stealthy F-35. If the current trend holds, the F-35 might end up being the only Western fighter left on the market.