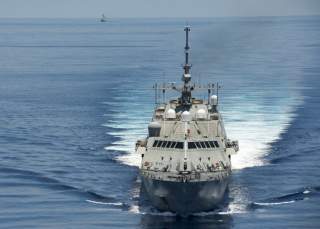 On Monday, a U.S. and Chinese naval ships squared off in the South China Sea.

According to numerous news articles, and seemingly confirmed by the U.S. Navy, the Yancheng, a PLA Navy Type 054A guided-missile frigate closely tracked the USS Fort Worth, a U.S. Navy Freedom-class littoral combat ship, as the latter patrolled the South China Sea near disputed Spratly Islands.

A photo released by the U.S. Navy showed the USS Fort Worth patrolling the area with the Yancheng trailing it in the distance. Vice Adm. Robert Thomas, the commander of America’s 7th Fleet— whose area of operations includes the South China Sea— sought to downplay the significance of the event. “It’s routine for U.S. 7th fleet ships to operate in the South China Sea and also routine for [Chinese] PLAN ships to operate at visual range of us,” Thomas said, Stars and Stripes reported. “Not a day goes by that the U.S. 7th Fleet and the PLAN are not talking to each other.”

Still, the incident occurred right as the U.S. military is considering sending more ships and planes to patrol areas in the South China Sea that China considers its sovereign territory. The Wall Street Journal reported on Tuesday that U.S. Defense Secretary Ash Carter has directed his staff “to look at options that include flying Navy surveillance aircraft over the islands and sending U.S. naval ships to within 12 nautical miles of reefs that have been built up and claimed by the Chinese in an area known as the Spratly Islands.”

The move comes as China’s reclamation projects in the Spratly Islands has expanded reefs from 500 acres last year to as many as 2,000 acres currently. Satellite images has also revealed that China is building airstrips capable of handling fighter jets on some of these artificial islands.

Still, U.S. military officials speaking with the Wall Street Journal and Reuters had said that the United States has thus far stopped short of breaching the 12 NM perimeter around the fake islands China administers in the Spratly Islands.

“U.S. planes have flown close to the islands where the building has been taking place, prompting Chinese military officers to radio the approaching U.S. aircraft to notify the pilots that they are nearing Chinese sovereign territory. In response, U.S. pilots have told the Chinese that they are flying through international airspace,” the Wall Street Journal report said.

It was unclear if the USS Fort Worth had patrolled within 12 NM of any of the artificial islands that China administers in the region. However, some reports said that during the incident the USS Fort Worth radioed the Chinese naval ship to remind it that it was in international waters. The PLAN guided-missile frigate reportedly did not respond to the U.S. Naval vessel.

The report of the new U.S. military proposal earned a sharp rebuke from Chinese officials. “We are severely concerned about relevant remarks made by the American side. We believe the American side needs to make clarification on that,” a Chinese Foreign Ministry spokesperson was quoted as saying just hours after the Wall Street Journal report was first published.