Face the Facts: Russia's Military Is Modernizing Into a Lethal Fighting Force 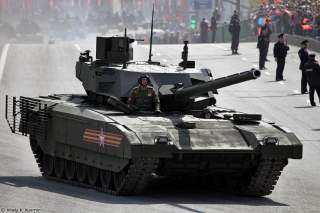 Thankfully, the Russian military is not ten feet tall. No one said it is. But that is the way some unnamed “senior Pentagon officials” want to spin the legitimate concerns of senior military officers regarding the challenges posed by the improved capabilities of a rapidly modernizing Russian military. It is even worse when some in the media try not only to make such a case but to demean the reputation and honesty of a military officer who is courageously attempting to get the Obama Administration and the American people to take seriously a growing threat to our national security and that of our allies.

Russian military modernization and the challenge it poses to the nation and the military has been publicly acknowledged at the most senior levels of the Department of Defense. Explaining the need for the so-called Third Offset Strategy, Deputy Defense Secretary Robert Work explained that one of the motivations was the need to respond to the challenges posed by the Russian military. “It’s modernizing a military that was in steep decline throughout the 1990s and the early 2000s. Its naval and air units are operating at a pace and an extent that hasn’t been seen in quite some time, to include a large increase in trans-oceanic and global military operations.” The Under Secretary of Defense for Acquisition, Technology & Logistics has been telling anyone who will listen that the United States is losing its technological advantage vis-à-vis China and Russia in the air and maritime domains, electronic warfare, space, reliable communications and ISR.

Senior serving general officers have been just as clear in their warnings that on land, sea and in the air, U.S. forces are being challenged by the new and improved Russian military. Since his hearings on being nominated as Chairman of the Joint Chiefs of Staff, General Joseph Dunford (USMC) has been crystal clear in the view that Russia is this country’s number one military threat. In a March 2016 presentation at CSIS, General Dunford went even further, declaring that “the Russian military presents the greatest array of threats to U.S. interests.  Despite declining population, shrinking economy, Russia has made a significant investment in military capabilities.  Putin has recently fielded a wide range of systems to include new intercontinental ballistic missiles, aircraft, nuclear-powered submarines, tanks, and air defense systems.  We’ve seen some of Russia’s more modern conventional capabilities on display in Syria, and we’re closely tracking Russian developments and actions in space and in cyberspace.”

The new Chief of Staff of the Army, General Mark Milley has made similar statements. Then there are the statements by the outgoing Supreme Allied Commander, the military head of NATO and an Air Force officer, General Phillip Breedlove, such as this one: “Russia continues its long-term military modernization efforts, and its recent actions in Ukraine and Syria demonstrate an alarming increase in expeditionary power projection and combat capability and logistical sustainment capability. Russia has spent the last twenty years analyzing U.S. military operations and has established a doctrine and force to effectively counter perceived U.S. and NATO strengths.” The commander of U.S. Air Force Europe told the New York Times that the Russian buildup of air defenses threatens NATO’s access to air space in parts of Europe, including one-third of the skies in Poland.

The Russian military is not yet ten feet tall. But it is five foot ten inches and growing. Its growth spurt since the nearly botched operation against Georgia in 2008 is impressive. The Russian defense ministry routinely demonstrates its new-found capabilities by running large-scale snap exercises with forces that number between 40-100,000 from all services. They are now even throwing in the first use of nuclear weapons. In its operations against Crimea and Ukraine, Russian forces demonstrated a heretofore unrecognized capability to coordinate armored, artillery and air units along with the highly successful employment of electronic warfare, drones and long-range artillery to locate, jam and then destroy Ukrainian operational level command posts.

The critics would have you believe that the true purpose behind discussions of the Russian military threat are purely self-serving; that the Army, in particular, wants more resources and personnel. Yet, the National Commission on the Future of the Army looked at the challenges facing that service and concluded that: “Projected Russian doctrine and capabilities to threaten U.S. interests suggest the need for an Army with sufficient ability, as part of a joint and combined NATO or other multinational force, to quickly counter Russian armor, artillery, aviation, and proxy forces attacking European allies. . . .  A substantial threat from manned aircraft, numerous unmanned aerial vehicles, and rockets presents the need for robust anti-air and rocket defense capabilities.” The Commission would seem to be on the side of those arguing for greater investment in Army capabilities to address the Russian threat. By the way, the report also recommends sending a heavy brigade combat team back to Europe.

When an article in a respected online publication ignores compelling evidence of the serious nature of the Russian threat and chooses to target one particular participant in the current debate, you have to ask the question why?

I don’t usually pepper my blogs with citations like some overanxious grad student seeking to impress the professor. But when presented with articles that are essentially hit pieces, quoting unnamed sources and retired military personnel and failing to fairly present the balance of evidence and testimony of current senior civilian and military personnel, I felt it was important to present the other side.