Fact: Russia Pitched the Idea of Joining NATO in 1954 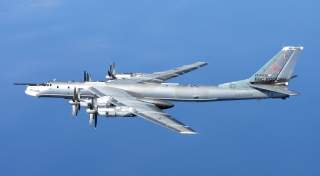 As strange as it seems, in 1954 when the United States and the Soviet Union were settling into a pattern of Cold War hostilities, the Kremlin actually proposed to join the NATO alliance on March 31 of that year.

The Soviets made the pitch for NATO membership after the Kremlin’s proposal for a pan-European collective security treaty at the Berlin Conference of Foreign Ministers in February 1954 was shot down by Western powers. While the Soviets expected to be rejected—and they were—Moscow considered it to be a win-win proposition.

“Most likely, the organizers of the North Atlantic bloc will react negatively to this step of the Soviet government and will advance many different objections. In that event the governments of the three powers will have exposed themselves, once again, as the organizers of a military bloc against other states and it would strengthen the position of social forces conducting a struggle against the formation of the European Defense Community,” Soviet Foreign Minister Vyacheslav Molotov wrote in a memo addressed to Georgy Malenkov—the titular head of state—and Communist Party General Secretary Nikita Khrushchev—with whom power actually rested. A copy of the document can be found at the Wilson Center.

However, it would have served the Soviets perfectly well to see their proposal meet the approval of the United States, France and the United Kingdom. “Of course, if the statement of the Soviet government meets with a positive attitude on the part of the three western powers this would signify a great success for the Soviet Union since the USSR joining the North Atlantic Pact under certain conditions would radically change the character of the pact,” Molotov wrote. “The USSR joining the North Atlantic Pact simultaneously with the conclusion of a General European Agreement on Collective Security in Europe would also undermine plans for the creation of the European Defense Community and the remilitarization of West Germany.”

But Molotov did foresee problems in the event the Soviet Union became a NATO member. NATO would likely insist on democratic institutions while the Soviet Union considered the Westphalian concept of sovereignty sacrosanct. “If the question of the USSR joining it became a practical proposition, it would be necessary to raise the issue of all participants in the agreement undertaking a commitment (in the form of a joint declaration, for example) on the inadmissibility of interference in the internal affairs of states and respect for the principles of state independence and sovereignty,” Molotov wrote.

As Professor and Head of the School of History at University College Cork in Ireland and author of the book Molotov: Stalin's Cold Warrior, Geoffrey Roberts—who translated the document—notes, the length of Molotov’s memo is unusual. Molotov likely knew that his proposal would be controversial in the upper echelons of the Soviet Communist Party. “It was unusual, however, for Molotov to present the Presidium with a long, discursive memorandum justifying what was being proposed. Usually, he just sent a short note enclosing the foreign ministry's proposals which were then discussed in personal conversation at the Presidium level. On this occasion Molotov evidently felt the need for an advance written justification of what was being proposed,” Roberts wrote for the Wilson Center’s Cold War International History Project.