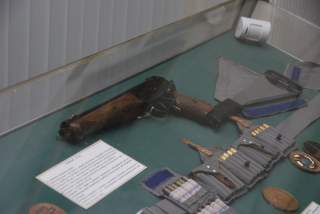 To this day, the Russian Federal Space Agency refuses to talk about the weapon—though it’s an open secret. Astronauts heading to the International Space Station have trained with it, and some have even talked about it.

And in case there’s any doubt about its existence, there’s one on display in a Russian museum.

It’s the TP-82 survival pistol. There was a time when Russian cosmonauts regularly traveled to space with the gun in tow. But calling it a pistol is slightly misleading—the TP-82 more like a small shotgun.

The Soviet Union included the weapon in Granat-6 survival kits stashed inside Soyuz capsules between 1982 and 2006. The odd weapons also found their way into military aircraft survival kits.

Having a gun inside a thin-walled spacecraft filled with oxygen sounds crazy, but the Soviets had their reasons. Much of Russia is desolate wilderness. A single mishap during descent could strand cosmonauts in the middle of nowhere.

In March 1965, cosmonaut Alexey Leonov landed a mechanically-faulty Voskhod space capsule in the snowy forests of the western Urals … 600 miles from his planned landing site.

For protection, Leonov had a nine-millimeter pistol. He feared the bears and wolves that prowled the forest—though he never encountered any. But the fear stayed with him. Later in his career, he made sure the Soviet military provided all its cosmonauts with a survival weapon.

Leonov’s lobbying efforts culminated in the TP-82. It was essentially a sawed-off, double-barreled shotgun with a short-barreled rifle added onto it. It was good for hunting small game, while packing a big enough punch to deter a 1,000-pound brown bear.

Shooting this combination pistol took more effort than most firearms. The gun had three barrels and two hammers.

The right hammer fired a 12.5 x 70-millimeter shotgun shell out of a smoothbore barrel. A vertical thumb-switch shifted the left hammer between the second smoothbore barrel and a rifle barrel underneath. This last barrel fired 5.45 x 39-millimeter rifle cartridges.

It was far from user friendly. But the manual action and simple mechanical selection prevented jams in the harsh conditions of the cold, damp, sub-arctic forests of the taiga.

The Granat-6 portable survival kit came with a belt, a holster for the weapon and three kinds of ammunition. The belt contained 11 rounds of SP-P 5.45 x 39 ammunition for the rifle barrel. Although the same caliber as the AK-74, SP-P rounds contained soft points.

For the shotgun barrels, the Soviet designers gave the cosmonauts 10 cartridges each of SP-D bird shot and SP-S red signal flare. This meant a crashed pilot could hunt small game and call for help.

The belt carried a 14-inch spatula-shaped machete. The knife slotted into the bottom of the gun’s pistol grip to form a makeshift butt stock. A reinforced sheath covered the blade, stopping it from slicing a chunk out of the shooter’s torso during recoil.

It was a pretty good knife, too. Besides cutting branches for firewood or clearing a path, crashed pilots could use it to slice bricks out of impacted snow—the essential building blocks of igloos.

The TP-82 was the Swiss army knife of firearms. But it wouldn’t have existed were it not for a Soviet space hero who landed into the cold Russian wilderness nearly 50 years ago.

That’s when Leonov’s pressurized suit ballooned and stiffened. His gloves and boots expanded away from his fingers and feet. The cosmonaut couldn’t even reach his chest-mounted camera to snap a photograph of the Voskhod 2 capsule.

Worse, he was trapped outside the airlock. His suit inflated so much, that it was larger than the narrow airlock opening. The only way in was to break the standard airlock entry protocol.

Without telling mission control, he released some of the air from his suit. The pressure fell to a quarter of an atmosphere—the equivalent of the air pressure at the top of Mount Everest in what mountain climbers call “the death zone.”

Leonov also depressurized too fast. This put him at risk of not only oxygen starvation, but decompression sickness—what undersea divers call “the bends.”

The stress on his body and the physical exertion under low-oxygen conditions elevated his temperature by 3.2 degrees Fahrenheit. As he fought to survive and stay conscious, sweat poured from his body and filled his suit. Leonov eventually inched into the airlock, but now he was stuck.

The tunnel-like airlock was wide enough for a man to stand, but there was little chance of the cosmonaut rotating vertically to close the hatch behind him. Still calm despite the incredible stress he was undergoing, the young lieutenant colonel contorted himself enough to close the hatch.

Leonov was back inside the Voskhod capsule. Belyayev began to repressurize the airlock. But this was just the beginning of the two cosmonauts’ problems. They still had to get home.

As Belyayev and Leonov prepared to slow their orbital velocity with a retrograde burn, Leonov noticed the automatic landing system was offline. They would have to reenter the atmosphere using manual controls.

The team tried to disengage the landing capsule from the orbiter, but a communications cable kept the two modules stuck together. This caused the spacecraft to spin. Fortunately, at more than 60 miles above the ground, the cable burned through, and the cosmonauts wrestled the landing capsule back under control.

The parachute opened, slowing and stabilizing their descent. On manual control, Leonov couldn’t reach the planned landing site in Kazakhstan. The pilot instead searched for an alternative, settling on the forests close to the Soviet city of Perm near the Ural Mountains.

The descent module landed around 100 miles from the city, touching down at nine in the morning on March 19, 1965. Explosive bolts blew off the capsule’s door, and cold air seeped into the chamber. As a further insult—the module’s heater was broken.

Fir and birch trees towered over them. But neither men were strangers to the wilderness. Leonov grew up around the taiga forests of Siberia. Belyayev was from Vologda, north of Moscow. They both knew that wolves and bears lurked in the surrounding woods.

It was mating season, so the predators would be particularly aggressive.

And the cosmonauts had a gun.

“We had only one pistol aboard our spacecraft, but we had plenty of ammunition,” Leonov recounted in the book Two Sides of the Moon co-written by American astronaut David Scott.

But a nine-millimeter pistol was hardly the most suitable defense against a 600-pound Eurasian brown bear.

Soviet direction-finding stations at Odessa and Saransk quickly locatedtheir approximate location. The cosmonauts had telegraphed “VN” over and over — “everything normal” — but their Soviet handlers had no other information about Leonov and Belyayev’s condition.

Helicopters set out to find the stranded capsule. Three hours after landing, the commander of rescue chopper reported visual contact. “I see the red parachute and the two cosmonauts. There is deep snow all around.”

The forest was impenetrable—a swift rescue out of the question. Hovering above the tree line, the chopper dropped clothes and supplies into the forest. Leonov and Belyayev took the supplies that made it to the ground, and prepared for a cold night inside the capsule.

On March 20, a search party skied to the crash site to confirm what the helicopter had discovered the previous day. There was no way to lift the cosmonauts out of the forest. The rescuers built a log shelter and fire, and the cosmonauts spent their second night in the taiga.

The next day, Leonov and Belyayev skied several miles to a waiting helicopter, and began the long journey back to Baikonur for a debriefing.

Leonov’s experience in the taiga stayed with him as he rose through the Soviet space program. In 1981, now an air force major general and second-in-command of the cosmonaut training program, Leonov received approval to commission a survival weapon for stranded cosmonauts.

Tula Arms Plant beat several other bids with its TP-82 pistol. Russian arms manufacturer TSNII TochMash produced a limited run of ammunition in 1982. Production continued until 1987, when the Soviet military ended the contract.

Moscow wasted no time supplying the weapon to its cosmonauts. Soyuz T-6 carried the first TP-82 to space in June 1982. Every cosmonaut trained with the weapon, and everyone knew the story of Voskhod 2. It had grown into a survival myth of wolves and bears stalking Leonov and Belyayev.

Some versions of the Voskhod 2 story mention wolves scratching at the capsule’s hatch—but the truth is less exciting. Rescue aircraft chased away a pack of wolves a mile or two from the module. Luckily, Leonov and Belyayev avoided any encounter with the animals.