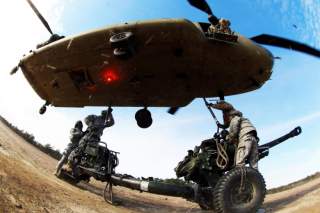 FORT BENNING, GA, U.S. ARMY MANEUVER CENTER OF EXCELLENCE—As the wet bulb pushed 109, 12,000 US Army Soldiers continued to train across the sprawling post on the banks of the Chattahoochee River to be our newest Infantrymen, Armor crewmen, paratroopers, Cavalry troopers, snipers, and master gunners among a host of other martial skills.  While the business of training our future Soldiers and leaders continued unabated, 3 Commanding Generals of the Maneuver Center shared the campus. Major General Eric Wesley, the current commanding general hosted his two past predecessors in separate events on Benning. Lt. Gen. HR McMaster, the current director of ARCIC, and the MCOE CG from 2012-2014, was on post to witness the demonstration of a new 30mm cannon as he continues to drive increasing the lethality of our mounted platforms. Across post, in the afternoon, Lt. Gen. Scott Miller flew in to give a presentation to the officers and noncommissioned officers in our leadership courses. He gave up command to Wesley, a few short months ago to return to the Special Operations forces as the commander of Joint Special Operations Command.

What emerged on Friday was the clear articulation of the Army’s determination to win the current fight while deterring near peer threats.  Just as Nadia Schadlow has written on the difficulty of the Army to articulate its mission today, given the emerging Russian threat in the midst of a counter-terror campaign, Miller and McMaster addressed aspects of this at Benning. Retired Major General Scales also postulates that the Army can (or will) only focus on one type of warfare or another, but the chattering crowd has set up a strawman argument.    What is often portrayed as a dilemma, is in actuality a false choice that our senior Army leaders must choose between the competing demands of resourcing the current global fight and deterring the possible challenges to the American world order in the future. In this “choose between the two” narrative, the war against ISIL and other terrorist threats is pitted against the need to regain the conventional dominance required to deter a revanchist Russia, an erratic North Korea, a China that has expressed its goal to challenge American power along with other conventional threats to American security interests.  Many came away from the divergent discussions with McMaster and Miller believing that we must choose one of two options. We must have the “global SWAT team” that pursues terrorists across the globe, into the deep web of the internet, and into the caves of the remotest places on earth, and in order to do so we must turn away from the heavy armored formations that can deter the Russian Brigade Tactical Groups massing on the western Russian steppe. The other camp desires to look past the current fight against terrorists in mud floored huts and to solely focus on the “real” challenges to the post World War American led economic and security world order – Russia and China - and to face that threat we need new tanks, new organizing concepts and new formations.

Of course this is a false choice. Miller argued eloquently that America must win the fight that it is in today. In the 24 hours leading up to his talk, a terrorist killed nearly 90 civilians in the French Mediterranean city of Nice. He did it with a truck. Not a truck bomb, just a truck. Miller walked around the world and where we must address emerging, networked, lethal threats to the civilized world and how it came down to the Army to address them as the Army makes up nearly 4/5ths of our Special Operations Command forces. Congruent with this need, is McMaster’s and Wesley’s focus on rebuilding the conventional force and its capability to operate against the high-end conventional challenge that the Russian Army poses to America’s Army in Europe and her NATO Partners. The ability of NATO and the US to deter Russian aggression, especially in the Baltics, will be central to the survival of NATO and the underpinning it provides to European economic success. A failure to defend our NATO allies in Estonia, Latvia and Lithuania could signal the unravelling of NATO and its Article 5 protections with unknown second and third order effects for the solidarity and prosperity of the Western world.  There is no requirement for the US to match Russia tank by tank, soldier by soldier along the Baltic frontier – we didn’t in the Cold War along the Inter-German Border – and we don’t need to now. But we do need to demonstrate the will AND the capability to defend the sovereignty of the Baltic states to deter Russia.

McMaster and Miller don’t disagree, in fact they are in violent agreement. During Miller’s tenure at Benning he often lobbied for the return of Armored Cavalry Regiment like capabilities in the conventional force and McMaster has stressed the importance in prevailing in the war as he has called it, “between the civilized world and barbarism.”  Miller and McMaster are two sides of the same coin.

The job for Army leadership today is to articulate to the American people and our civilian leadership the desperate need to do both – resource the current fight and to prepare for the near and long term conventional challenge posed by the rise of near peer competitors. To choose one over the other is fraught with risk. To ignore the growing global reach of ISIL inspired terror only asks for more Nices and more Orlandos. Conversely, to ignore the Russian challenge to our eroding conventional overmatch is to invite challenges to the world order that has provided the security underpinning to the greatest growth in global prosperity in the history of the world.  These are false choices. We must do both. We must prosecute the current war with all of our vigor and we must invest in the future capabilities that are required to deter would be challengers. The real question is, can we convince the people and our civilian leaders that the nation must bear this financial and resource cost to do both?