Fifteen Years in Afghanistan: The Folly of Fighting Alongside a Perfidious Pakistan 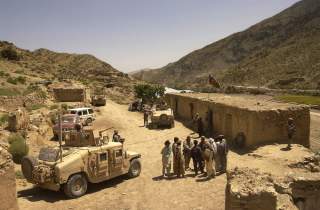 “No country has ever benefitted from a protracted war”—Sun Tzu

This month marked 15 years of fighting in Afghanistan.  This makes the war there over five years and ten months longer than the Soviet-Afghan War.  Thousands of Americans and tens of thousands of Afghans and coalition partners have paid the ultimate sacrifice trying to stabilize Afghanistan and to prevent the return of the Taliban.  A key reason why the war has protracted is a failure to know the enemy.

During those 15 years, American and Coalition forces did indeed adapt to counterinsurgency and counterterrorism operations.  The Afghan security forces have also markedly improved in both quality and quantity. In fact, when Afghan security forces fight battles and interact with the Taliban, it is the Afghan forces that generally outmatch their Taliban enemies.

When facing an insurgency compounded with terrorism, if the counterinsurgents are not winning, they are losing.  The insurgents win by not losing.  Our side has won many battles and succeeded in many actions but this means nothing when facing a stalemate stemming from strategic asymmetry.

The reason for this situation is the support that the Taliban benefit from in Pakistan.  Pakistan pretends to be a friend but Pakistan’s behavior, in its persistent employment of the Taliban and other proxies to sow violence in Afghanistan, is the behavior of an enemy.  The Taliban would have withered by now without sanctuary and support.

Pakistan’s strategic calculus drives its duplicity.  Its institutions have an ingrained strategic cultural infatuation with maintaining strategic depth on the country’s western flank in Afghanistan.  Pakistan’s security elites’ paranoia about India and Indian influence in Afghanistan have led them to consistently foment insurgency and terrorism there to exploit proxies with whom they exert influence.

Pakistan’s perfidy, in claiming to be a friend that supported our efforts against the Taliban and al Qaeda while actually regenerating and directing the Taliban, has imposed a strategic paradox on our efforts to defeat the insurgency and stabilize Afghanistan.

Defeating an enemy means removing its capacity and its will.  The Coalition has hit the Taliban’s capacity year after year but the will of the Taliban rests with its regenerative potential and leadership, all protected in Pakistan’s sanctuary.  Pakistan has created this paradox to prevent the defeat of the Taliban, protract the war, and exhaust our will, potentially making our capacity irrelevant because we ultimately quit the fight after years of stalemate.

What stresses sanity is that even while we tolerate the fiction that Pakistan has been an ally that had been doing all it could do support the war against terrorists, the Defense Department has essentially recounted Pakistan’s double game, in the open, every year since 2008 with the Congressionally prescribed reports on progress in Afghanistan.  Almost every report identifies Pakistan’s support and sanctuary for the Taliban as a major impediment to strategic success.

A typical 1230 Report noted that Afghanistan continues to face a resilient insurgency that uses sanctuaries in Pakistan to attempt to regain lost ground and influence through continued high-profile attacks and assassinations.  Pakistan has also continued to allow Afghan-focused insurgents sanctuary and support.

The reports usually illumine things like this:  “the insurgents relied on high profile attacks to reassert operational influence in key Pashtun areas and to influence key audiences at the strategic level.” Other report insights revealed that Pakistan was still falling short on interdicting and disrupting the production of IED components, despite greater engagement and cooperation on the issue.

A report from late 2013 specified, the “Afghan insurgency maintains sanctuaries in Pakistan, which is a major factor preventing their decisive defeat in the near term.” Additionally, a “significant portion of the materials which perpetuate the conflict emanate from or transit through Pakistan.”

A reading of the reports will reveal that most of the materials required to protract the conflict emanate from or transit through neighboring Pakistan.  For example, “IED, which kill or maim more Coalition and Afghan troop than any other weapon originate mainly from fertilizer and military or commercial grade explosives from Pakistan.”

Attentive readers will find in almost every report that sanctuaries in Pakistan from which the Taliban attack into Afghanistan remain a grave problem and that  “Afghan insurgent groups that attack U.S. and coalition forces continue to operate from Pakistan.”

In stark terms, the reports acknowledge that the IED threat emanating from Pakistan remains heavy.   The reporting also recognizes that groups like the Haqqani Network, the favored and most lethal Pakistan proxy, remain potent forces with the ability to conduct high-profile attacks, directed at both Afghan and Coalition targets, particularly in Kabul.

The butcher’s bill stemming from Pakistan’s dissembling has been high, in terms of blood spilled, resources spent, and the number of years at war.  Pakistan’s utter deceit and our continued delusion that Pakistan is a friend will lead to more of the same over the next 15 years without a serious change in how we view and treat Pakistan.  It would be hard to imagine a worse friend and it strains credulity that after what happened on 9/11, the U.S. would choose to ally with the only country on the planet with its capital city named after Islam, and the one country that had a singularly significant role in creating Islamist terrorists over the last 50 years.

When U.S. policy shifted to impel the ill-conceived imbroglio in Iraq in 2003, Pakistan helped regenerate the Taliban.  The Taliban’s areas of influence then expanded between 2004 and 2008.  During the surge in Afghanistan in 2009-2011, the Coalition and the Afghan forces did assert more influence, taking many areas in the south and east away from the Taliban.  This was fleeting.

Post-2014, with the Operation Resolute Support reduction in coalition forces, the Taliban, with the help of Pakistan’s support, once again increased their influence.  There are at least three options for the next 15 years.  We can get open eyed and ruthless, and treat Pakistan as the enemy it truly is by imposing our will, cutting most aid, and using force and coercion where necessary.

Another possible option is to do to Pakistan what Pakistan has been doing to the U.S. and its friends.  We can pretend to be an ally but raise havoc inside Pakistan via proxies, cutouts, and other methods.  A potential and ironic first step would be to eliminate the sources of explosives ingredients inside Pakistan, the principal ammonium nitrate plants.

The third, and least desirable option is the status quo, continuing to settle for a strategic stalemate in perpetuity.   In other words, continue to contain and disrupt through kill and capture operations.  These are ephemeral and do not equate to strategy but in the end disruption and containment are better than doing nothing.

Continuing to pay out money to Pakistan for its support in the war against terrorists at the same time that Pakistan, the enemy, is employing and sustaining its Taliban and other militant proxies to kill and maim Afghan and Coalition partners is nothing short of strategic malfeasance.

Colonel Robert Cassidy, Ph.D., U.S. Army, is the author of three books and a number of articles about irregular warfare and Afghanistan. He has served a number of tours in Afghanistan and Iraq.  The views in this article are his own and do not represent the views of the U.S. Army or the U.S. Naval War College.