Filling in the Blanks at Trump’s Pentagon 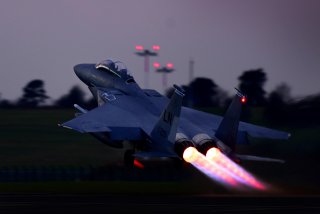 Here we are, two months into the Trump Administration—that’s approaching 5 percent of his first term—and Defense Secretary Jim Mattis remains the only Trump-tapped Pentagon poobah.

He’s the lone confirmed civilian appointee inside the Defense Department, according to a nifty job tracker from the Washington Post and the nonprofit Partnership for Public Service that’s tracing 53 senior Pentagon positions.

The Army secretary is listed as “WITHDRAWAL PENDING” and the Navy secretary is branded “FAILED.” Last week, reports surfaced that Trump’s choice to oversee the Air Force is in trouble. Forty-eight of the 53 posts carry the label “NO NOMINEE.”

It’s these civilians who are charged with outfitting and training U.S. troops to fight. Given their absence, what a great time for a coup! No, not a military coup—but a priorities putsch.

Trump has already made it clear he simply wants to ladle $54 billion more into the Pentagon’s coffers next year above the sequestration ceiling set by Congress. So the building, like one of those new-fangled self-driving cars, will be able to keep on moving.

But for the sake of this exercise, let’s not debate what they call the “top line” inside the Pentagon— that all-important sum that includes the money it gets to spend in a given fiscal year (which has run from October 1 to September 30 since 1976, when Congress slid it from July 1 to June 30 because Congress couldn’t get its act together [nothing has changed]). And be mindful of the fact that the defense budget doesn’t include spending on veterans or nuclear weapons, which drive the total cost of defending the nation to nearly $1 trillion annually.

Let’s just take that top line—about $600 billion this year—and wonder if it is being spent in the smartest way possible.

There are a couple of things to keep in mind about building the U.S. defense budget.

First of all, the military services, like siblings eyeing Mom’s fresh-baked pie, want to ensure no one gets too big a slice. That’s kept harmony inside the Pentagon for decades, but it hasn’t done much for taxpayers.

Second, civilians have, by and large, let the military services dictate requirements, and the procurements and personnel that flow from them. The only persistent civilian presence when it comes to military spending is on Capitol Hill, whose senior members often serve longer than generals and admirals do in uniform. By comparison, presidents and defense secretaries come and go pretty frequently.

But lawmakers with military experience are an ever-shrinking presence. There are few Eisenhower-like sages in American national-security policy today because, well, there are fewer Eisenhowers. And senators and representatives who never served tend to cut the Pentagon more slack than those who wore the uniform—and know when they’re being snow jobbed. Lawmakers’ willingness to entertain the service’s “wish lists” only prove the point.

First and foremost, the U.S. military is an immense bureaucracy. That breeds conservatism—as a character trait, not a political philosophy—in its more senior ranks. It doesn’t much care for change, or for outsiders—even in Congress. (Raise your hand if you remember the Pentagon vainly telling lawmakers to stuff it when it came to the wholesale changes in military command that Congress ordered it to make under 1986’s Goldwater-Nichols act, or the creation of the U.S. Special Operations Command the next year). The only way to change the U.S. military is to inflict it from the outside. Alas, few civilian outsiders are demanding change, so it’s simply not happening, despite flashing red lights that says the status quo is unacceptable.

That leaves the military in control. And, God bless them, they always want to be “fustest with the mostest” to the battlefield. The brass says it needs the money to win the nation’s wars. Trouble is, it hasn’t been winning. If a teen-ager had broken curfew as often as the U.S. military has failed to win, Mom and Dad wouldn't be increasing her allowance.

So, just for the heck of it—“notionally,” as defense officials say when they’re making stuff up—let’s blue-sky Pentagon priorities. For the sake of argument, let’s retool our military the way it might have been done 25 years ago after the collapse of the Soviet Union. Absent the threat of Red T-72 tanks plunging through Germany’s Fulda Gap, let’s cut the Army and Air Force even more than we did following the Cold War. At the same time, let’s bolster the Navy, relatively speaking, for the stability its continuing presence can mean around the globe, along with its land-force component, the U.S. Marine Corps (there’s a reason the Marines serve under the Navy secretary).

But the sea services don’t get a free ride. The three huge Ford-class carriers now on order should be the last ones built, to be replaced by smaller vessels crammed with unmanned aircraft. The Marines will have to forsake their costly V-22 and F-35B aircraft, earmarked for amphibious-assault missions that haven’t happened in more than 60 years.

We’ll strengthen the Navy’s fleet of “boomer” submarines, the most secure leg of the nation’s nuclear triad. And we’ll do away with the Air Force’s bomber and ICBM legs.

That screaming you hear? It’s the inevitable shrieks from assorted generals and admirals whose oxen are in danger of being gored. Think of it as the start of a long-overdue discussion. These details aren’t important, nor are the shrieks. What counts is that the nation finally begins having this conversation.