Finland: Just Say No to NATO 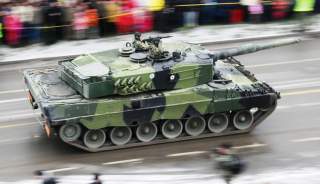 Moscow’s increasingly aggressive behavior created a frigid atmosphere around the Baltic Sea throughout 2014. Russia has taken every opportunity to provocatively illustrate its strength, prompting concerns from the Nordic and Baltic states that live in Russia’s shadow. For Finland and Sweden, European Union members lying outside NATO’s protective shield, growing concerns have prompted thoughts of seeking shelter in the alliance. Yet, despite Finnish prime minister Alexander Stubb’s endorsement of the NATO option, Finland’s entrance into the alliance would constitute a strategic mistake. While Russia’s actions may rattle neighbors, Moscow possesses little reason to intervene in Finland as it did in Ukraine. Finnish membership in NATO, however, would create a military threat that Russia could not ignore, inadvertently placing Helsinki in Moscow’s crosshairs.

The Putin regime has antagonized the West most visibly via an exponential growth of air sorties. NATO has scrambled fighters to respond to Russian aircraft on over 400 occasions in 2014, which signified a 50 percent increase in flights from 2013, according to NATO Secretary-General Jens Stoltenberg. For Finnish president Sauli Niinistö, the recent maneuvers impinging on Finnish airspace are clear instances of Russia “testing how we’d react.” Consequently, Finnish elites are reconsidering NATO membership in order to obtain firm commitments against potential aggression. Public opinion traditionally has disfavored joining the alliance; nevertheless, as Prime Minister Stubb notes, “each threatening gesture [from Moscow] strengthens those who support NATO membership.”

Yet, one must question whether these incidents represent the tip of the iceberg of a greater danger, or mere pinpricks, designed to irritate and keep the West on edge. It is difficult to discern an imminent threat to Finland, which does not fit the pattern of aggression that has culminated in the Ukraine conflict. Unlike Kyiv or Tbilisi, Helsinki decidedly departed Moscow’s orbit, both politically and economically, twenty years ago, when it joined the European Union. Presently, there exists no struggle between Russia and West for the Finnish soul. Nor do ethnic and linguistic ties provide the cover of President Putin’s doctrine of extraterritorial protection of Russian speakers. Finland’s ethnic and linguistic composition does not mirror that of Ukraine, or even those of Estonia and Latvia. Finland lacks a sizable ethnic Russian minority; only 0.2 percent of the Finnish population speaks Russian as a first language.

Ethnic politics represent an essential smokescreen in galvanizing popular support for Putin’s adventurism. The Russian public remains extremely uneasy with the notion of a war over Ukraine. An August poll by the Levada Center revealed that only 43 percent of respondents would “support the Russian leadership in the event of open military conflict.” The myth of “fellow Russians” struggling against the perceived death march of fascism has transformed this hesitancy into support for Ukraine’s rebels. Without the pretext of similarly imperiled ethnic brethren in Finland, it would be difficult for the Putin government to contrive a narrative that garners public backing for a campaign against the Finns—absent some other provocation.

However, Helsinki’s accession to NATO would create a categorically different problem by militarizing the Finnish-Russian border. Geography has dictated the strategic necessity of Russia maintaining a friendly Finland since the reign of Peter the Great. Moscow’s fears of a militarily aligned Finland are not completely unfounded; the long Russian memory recalls that had Finland acted in lockstep with its German co-belligerent in 1941, Axis forces would have likely completed the siege of Leningrad.

Finland’s entrance into NATO would more than double Russia’s border with the alliance.[1] In the eyes of the Putin government, NATO would gain an immense staging area to potentially replay the Kosovo campaign against Russia. Moscow’s interventions in Georgia and Ukraine provided an unequivocal declaration: an enlarged border with NATO represents an intolerable threat that the Kremlin will employ force to prevent. Consequently, while NATO membership would offer an Article V guarantee, the Finns would discover a bull’s-eye attached to it.

This paradox appears to leave Finland helpless on the West’s periphery. Yet, the transatlantic community can bolster Finland against the contingency of Russian interference without transforming Helsinki into a target. Perhaps most importantly, NATO can seek to check Russian aggression where it is most plausible: the Baltic States.

Establishing a credible line of deterrence in Tallinn and Riga would serve as the “first line of defense” for Helsinki in two senses. The Baltic States represent the region where Russia would be most likely to attempt to undermine NATO. A resolute stance against Russian meddling in that region, therefore, would effectively “head Moscow off at the pass.” The Baltics may not be a geographic buffer between Finland and Russia; nevertheless, successfully countering Russia there would demonstrate Western resolve, and disabuse Moscow of the notion that Europe’s east constitutes easy prey.

Second, robust deterrence in the Baltic States could thwart the one alternative scenario that places Helsinki in Moscow’s sights: a Ukraine-esque crisis in the Baltics. In such an incident, Finland’s participation in a NATO operation, particularly likely given the conclusion of a host nation support memorandum of understanding at the Wales Summit, would ignite Russian fears of NATO forces along its border. Therefore, proactive measures drawing an effective line of deterrence at the Baltic States reflect a critical step in preventing a future Finnish crisis.

Fortunately, this scenario is already a byproduct of ongoing NATO efforts to buttress the Baltic allies; unfortunately, it is accompanied by growing uncertainty that could spur a Western misstep in the interim. The deployment of additional NATO forces to the Baltics and the conduct of exercises comprise portions of a lengthy program that will reinforce regional defenses. However, these measures require time, and, in the meanwhile, Russia’s air incursions incite speculations over Russia’s intentions that could drive the Euro-Atlantic community into a strategic blunder. Russia’s air operations are illegitimate, and NATO and the Nordic countries have responded correctly in boosting air patrols. Nonetheless, these relatively minor acts reflect an inadequate basis for Finland to move toward NATO. Such a blind pursuit of tactical security while disregarding strategic context would end in Finland obtaining neither.

Will Moreland is a master’s candidate at Georgetown University’s Walsh School of Foreign Service.

[1] This calculation excludes the Russo-American maritime border, instead detailing the cumulative Norwegian, Estonian, Latvian, Lithuanian and Polish borders that amount to approximately 755 miles, in comparison to the roughly 833-mile Finno-Russian border.