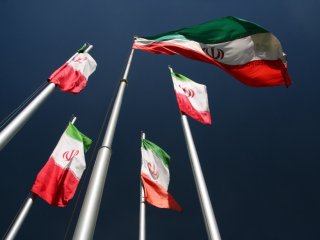 Iran’s fairly quick release early January 13 of ten U.S. sailors who had been detained the day before in Iran’s territorial waters was a real change from the Islamic Republic’s historical behavior. When Iran detained fifteen British sailors in the Persian Gulf in March 2007, the last such similar incident, Tehran turned it into a two-week propagandized hostage situation. So why didn’t Iran escalate to that degree this time?

Some background first. At least one of the U.S. boats had suffered some kind of mechanical problems and had drifted into Iranian territorial waters near Farsi Island on January 12 while enroute from Kuwait to Bahrain. The navy of Iran’s Islamic Revolutionary Guard Corps (IRGC), which has responsibility for the defense of the Persian Gulf, captured the two vessels and their crew. The sailors were detained, questioned and then provided food and ‘hospitality’. U.S. Secretary of State John Kerry worked feverishly with his Iranian counterpart Javad Zarif to ensure their safety and eventual freedom.

On the surface, this resolution appeared a testament, as Kerry claims, to the success of the new U.S.-Iran relationship following last July’s Joint Comprehensive Plan of Action (JCPOA) on Tehran’s nuclear program. Underneath, however, Iran’s behavior and motivations are more complicated. Here is what we have learned so far:

1) A channel of communication is open between the United States and Iran. In the Islamic Republic’s system of governance, the executive branch has only limited control over the state’s security apparatus. The military, including the IRGC, report to Supreme Leader Ayatollah Ali Khamenei, not to President Hassan Rouhani or his cabinet. There would normally be significant concern whether Foreign Minister Zarif could be an effective interlocutor in a crisis. While the United States should remain concerned that Zarif and his team are not empowered to negotiate on Iran’s behalf at the ongoing Syria peace talks, for example, we now know our official diplomatic communications channels do function in emergencies.

2) The IRGC Navy did not go rogue. The IRGC Navy—led by outspoken Rear Admiral Ali Fadavi—has a reputation for belligerent, cowboy-style tactics, frequently harassing foreign naval vessels and commercial shipping. As my colleague Michael Rubin recently noted, however, the IRGC does not engage in ‘rogue’ activities. Fadavi may very well have wanted to take this crisis further, as evidenced by his complaints of the U.S. sailors’ unprofessional conduct and suspicions of espionage. But Fadavi was clearly operating under firm guidance from the leadership in Tehran throughout the incident, just as Zarif was. The United States should consider Iran’s behavior as that of a singular actor, both its positive actions (responsive diplomatic engagement, food and blankets, a speedy release) and the negative (the sailors’ detention in the first place, as well as the video of the arrest and supposed confessions). Washington should not get lost in hopes that moderates like Zarif and Rouhani can help rein in the IRGC on security policies. Those are driven from the top.

3) Tehran does not want to risk its economic windfall from sanctions relief. Supreme Leader Khamenei’s fear that a prolonged crisis could threaten impending nuclear sanctions relief was likely the dominant motivator for Iran’s willingness to resolve the sailors’ detention fairly rapidly. When the United States is weighing new sanctions for Iran’s violation of United Nations Security Council resolutions on its ballistic missile programs, or pressing Iran on its destabilizing activities in the region, Washington should not be so nervous that Tehran will walk away from the JCPOA. They want those nuclear sanctions removed badly.

4) Iran still values defying and humiliating the United States. The Supreme Leader and the IRGC have made clear since the JCPOA that they continue to reject American foreign policy and our military presence in the region. The decision to quickly release the sailors was likely part of a compromise, with the Supreme Leader allowing the IRGC to still have its propaganda victory by releasing the inappropriate and humiliating footage of the initial detention and subsequent ‘apology,’ in violation of at least the spirit of the Third Geneva Convention on prisoners of war.

5) Tehran remains focused on deterring the United States and its allies. This crisis follows Iran’s recent provocative live fire exercises and ballistic missile launches to drive home their willingness to deter and retaliate against any perceived US or allied threats. Fadavi boasted that his forces kept the aircraft carrier USS Harry Truman in the cross-hairs of his coastal defense cruise missiles during the incident. Former IRGC Commander Mohsen Rezaie said the sailors’ detention sent a message to regional countries: “don’t play with fire.” Especially with Iran’s increasing confrontation with Saudi Arabia, expect the IRGC to remain confrontational in its operations in the Gulf and the Strait of Hormuz.

The risk of future miscalculations on the sea remains high. More concerning may be what Iran has learned about the United States from the incident. Kerry’s intense diplomacy and public expression of appreciation to the Iranians for their handling of the crisis likely feeds Tehran’s perception that the White House is restrained by fears Iran will walk away from the nuclear deal if pressed. This perception is only reinforced by U.S. hesitancy to impose new penalties for Iran’s violations of the UN missile test sanctions in October.

Should the United States fail to counter that perception, Iran will simply believe it has much freer hand to assert itself in the Gulf.