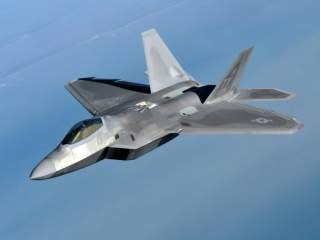 Even though tensions are running high after China deployed its powerful HQ-9 air and missile defense system to the disputed Woody Island in the South China Sea, war is unlikely to break out. But in the event of a conflict, the United States has one asset in the region that can effectively counter the HQ-9—the Lockheed Martin F-22 Raptor.

The HQ-9 is a very capable weapon that fuses the best qualities of the Russian-made Almaz Antey S-300P (SA-10 Growler) and the U.S.-made MIM-104 Patriot—which Beijing acquired thanks to Israel. But it also has features that most U.S.- and Russian-made surface-to-air missiles (SAM) systems don’t—such as an active electronically scanned array radar. A single HQ-9 battery can engage six targets simultaneously out to 120 miles at altitudes up to 90,000ft. Moreover, some versions of the HQ-9’s interceptor missiles are thought to be able to engage targets as far out as 150 miles. In effect, the weapon is powerful enough to create a de facto no-fly zone for conventional aircraft within that bubble.

The stealthy fifth-generation F-22 Raptor is the U.S. Air Force’s best counter to the HQ-9. Though the F-22 was originally conceived as a dedicated air superiority fighter, the Raptor has proven to be remarkably versatile aircraft. Indeed, in recent years, in addition to air superiority, the Raptor’s primary role has been to “kick down the door” for Northrop Grumman B-2 stealth bombers as part of the Global Strike Task Force concept because of its formidable ability to shred enemy air defenses. More recently over Iraq and Syria, the F-22’s powerful sensor suite has seen the Raptor being used as a reconnaissance and even a command and control asset.

The Air Force already as an expeditionary squadron of Raptors deployed to the region from Joint Base Elmendorf-Richardson’s 3rd Wing in Alaska. The 3rd Wing’s jets—which tend to be first in line for upgraded equipment—are in the latest Increment 3.2A configuration. That means that in addition to being upgraded with synthetic aperture radar mapping, geo-location capabilities and Small Diameter Bomb (SBD) capability, those jets feature much improved combat identification ability and a Link-16 feed that is fused with the rest of the Raptor’s sensor data.

It’s not clear if the jets that are currently in theatre are equipped with the Raptor’s Upgrade 5 software—which was scheduled to be released in October 2015—but those aircraft could also feature a rudimentary capability to launch the AIM-9X Sidewinder and AIM-120D AMRAAM, as well as feature an automatic ground collision avoidance system, if so equipped. Upgrade 5 allows Raptor pilots to exploit new weapons such as the AIM-9X high off-boresight dogfighting missile (Upgrade 4 in the case of the AIM-120D) using “rules of thumb”—but it does not display the correct symbology for the new ordnance. Full integration of the AIM-9X and AIM-120D will be fielded in 2018 along with much improved geo-location capabilities with the Increment 3.2B upgrade—which includes a new stores management system.

The Raptor—with the geo-location capability added in the Increment 3.1 upgrade—is a lethal weapon against enemy surface-to-air missiles like the S-300 and S-400—or HQ-9, as the case may be. With it synthetic aperture radar and geo-location ability, the Raptor can locate the highly mobile SAMs and engage them from relative safety using a combination of blistering speed and stealth. Indeed, the F-22 can sustain Mach 1.8+ without afterburners and has a radar cross section the size of a metal marble. That means it can get close enough to an HQ-9 site to engage it with a 250lbs SBDs or 1,000lbs JDAM satellite-guided bomb without being exposed for too long.

China’s HQ-9 deployment to Woody Island might allow Beijing to ward of the air forces of neighboring countries, but the arrival of the F-22 Raptor to the region means that the U.S. Air Force still has free reign over the skies of the South China Sea.