Flip-flopping Between Deterrence and Appeasement 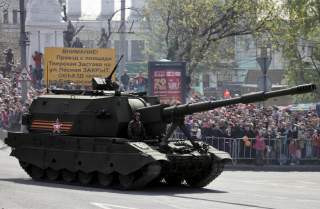 In trying to find a way to stop the bloodshed in Syria and settle the conflict in the breakaway eastern Ukrainian region of Donbas, Western foreign ministers have taken to guardedly praising Russia’s constructive role. This week (May 17), in Vienna, Russian Minister of Foreign Affairs Sergei Lavrov co-chaired another session of the International Syria Support Group with his counterpart from the United States, Secretary of State John Kerry. And according to Lavrov, Kerry “made additional assurances to put more pressure on the Syrian opposition and its foreign sponsors” to fully comply with an overall ceasefire and return to negotiations in Geneva on a political settlement with the regime of Syrian President Bashar al-Assad. Opposition forces that continue to disobey, “will be excluded from the ceasefire,” apparently giving al-Assad, his allies and the Russian military in Syria the legal right to bomb them unrestrictedly. The future of al-Assad was not mentioned in the Vienna communiqué. It seems Moscow has managed to maneuver Washington into de facto accepting Russia’s main long-term strategic goal—al-Assad must be kept in power in Damascus as the best possible alternative to a jihadist takeover, no matter how much blood has to be spilt to preserve his rule. Lavrov looked pleased: “I agree with Kerry’s assessment of the situation” (Rg.ru, May 17).

Meanwhile, German Foreign Minister Frank-Walter Steinmeier has argued that engaging Russia in cooperation is a priority: “It is not a gift, it is in our own interests; we need Russia to settle conflicts—obviously in Syria, but not only.” Steinmeier expressed hope Russia will return to the G7 group of leading democracies, which will again be transformed into the G8, if Moscow helps implement the Minsk agreements to settle the conflict in Donbas (TASS, May 15). If Minsk goes ahead, Steinmeier would evidently be quite happy to accept the annexation of Crimea and ready to forget Russia is not a democracy. Of course, President Vladimir Putin’s Russia was a full member of the G8 up to the Crimean annexation in March 2014, and that “engagement” did not seem to have helped modify the Kremlin’s behavior. In fact, the Russian foreign ministry recently announced Moscow has no desire to return to the G8 and that this format is dead (Interfax, April 19). Appeasement of authoritarian regimes like Russia’s routinely fails because it is interpreted as a manifestation of weakness, which solicits more aggressive actions to obtain even more concessions.

More than 25 years after the end of the Cold War in Europe, Western countries seem reluctant to wake up to the resurgent Russian challenge or even to, at a minimum, accept there is a serious problem. Forceful wakeup calls, when made, are—possibly by necessity—sometimes too drastic. On May 18, Sir Richard Shirreff, a retired British general who served as the North Atlantic Treaty Organization’s (NATO) Deputy Supreme Allied Commander in Europe between 2011 and 2014, presented in London his fictional book, 2017 War with Russia. This book describes a detailed scenario of Russia first pressing an armed offensive in Donbas to capture a so-called “corridor to Crimea” along the Azov Sea from Mariupol (Mariupil). Moscow then follows up this move with an invasion of Latvia in May 2017, which drags NATO into the fray. The conflict escalates and eventually goes nuclear. Shirreff strongly criticizes present British leaders for cutting the military and recommends that the North Atlantic Alliance, without delay, reinforce its conventional defenses in the Baltics by stationing more troops to deter Putin. Shirreff’s book presentation was noticed and reported on in Moscow. Several leading Russian parliamentarians called him a “mad warmonger” and accused “NATO generals” of wanting to provoke war (RIA Novosti, May 18).

This week, NATO’s military committee officially approved the deployment of four additional allied combat battalions to Poland and the Baltic states. The coming Alliance summit in July in Warsaw may also approve further deployments of allied troops to the Baltic region (Interfax, May 19). What remains unclear, however, is whether four battalions can be considered a credible deterrent. More importantly, the signals Moscow is receiving from the West are extremely muddled: It is a baffling mix of appeasement and deterrence.

Western politicians and military planners—regardless of whether they are “appeasers” or presumed “warmongers”—seem to be continuously misreading the Kremlin’s intentions and hidden fears. Shirreff, like many other Western generals, appears fixated on the assumed Russian intent to create a land “corridor to Crimea,” purportedly to consolidate Moscow’s land grabs in Ukraine—Donbas and Crimea. But such a presumption disregards the lack of evidence that Russian generals would actually want to establish such a “corridor” to the isolated Crimean peninsula, which currently lacks a territorial link with Russia proper. In August–September 2014, Russian troops decisively defeated Ukrainian forces south of Donetsk at Ilovaysk and Saur-Mogila. As Ukrainian forces fell back in disorder, Mariupol could have been easily taken, but Russian units stopped. No coastal railroad exists between Mariupol and Crimea, and the existing coastal highway is narrow, old and in total disrepair. Thus, creating a functional “corridor to Crimea” would require not only grabbing territory and carrying out a bloody siege of Mariupol, but it would also force Russia to build a railroad from scratch and expand the highway—consuming lots of time, effort and money. Instead, Moscow is investing in building a bridge to Crimea over the Kerch Strait. As an emergency option, the Russian Ministry of Defense disclosed that, in March 2015, during massive snap exercises, the Separate Engineering Brigade of the Southern Military District transported and deployed equipment to promptly build a floating bridge to Crimea over the Kerch Strait (Function.mil.ru, March 21, 2015).

On the other hand, Russia’s Kaliningrad exclave in the Baltic is strategically vulnerable—surrounded by NATO nations. In a time of crisis, all Russian overland links to this region would be fully cut, while sea and air communication through international waters—used at present for military transit—could be compromised. A Russian move to force open a land corridor to Kaliningrad in time of escalating crisis with the West would make much more military sense than a presumed “corridor to Crimea.”

Today, as NATO seeks to reinforce its defenses in the Baltics, the Russian high command (the General Staff) may be in a dilemma: To sit and wait as Western battalions and brigades arrive, solidifying a barrier surrounding Kaliningrad, or do something preventively. Russian military planning tends to be extremely rational, but its raison d’être seems to constantly elude Western comprehension.