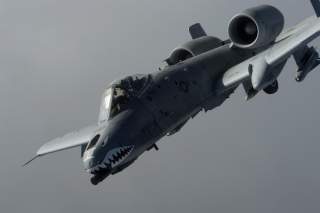 “I welcome reports that the Air Force has decided to keep the A-10 aircraft flying through fiscal year 2017, ensuring our troops have the vital close-air support they need for missions around the world. Today, the A-10 fleet is playing an indispensable role in the fight against ISIL in Iraq and assisting NATO’s efforts to deter Russian aggression in Eastern Europe,” McCain said in a recent statement.

Also, the A-10 has been performing extremely well in ongoing attacks against ISIS, creating an operational demand for the durable aircraft and therefore reportedly informing this Air Force decision.

“With growing global chaos and turmoil on the rise, we simply cannot afford to prematurely retire the best close air support weapon in our arsenal without fielding a proper replacement. When the Obama Administration submits its 2017 budget request in the coming weeks, I hope it will follow through on its plan to keep the A-10 flying so that it can continue to protect American troops, many still serving in harm’s way,” McCain added.

Although the continued existence of the A-10 is assured well into the next decade, the debate about what, if anything, might be able to replace it is quite likely to continue.