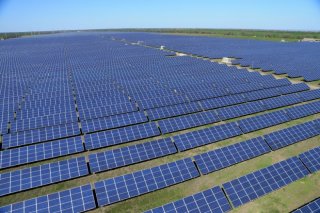 The Economist has a special feature on energy this week, and it is resolutely optimistic about renewables:

Measuring progress is tricky: the cost of electricity from new solar systems can vary from $90 to $300 per megawatt hour (MWh). But it is clearly plummeting. In Japan the cost of power produced by residential photovoltaic systems fell by 21% in 2013. As a study for the United Nations Environment Programme notes, a record 39GW of solar photovoltaic capacity was constructed in 2013 at a lesser cost than the 2012 total of 31GW. In the European Union (EU), renewables, despite a 44% fall in investment, made up the largest portion (72%) of new electric generating capacity for the sixth year running.

The clearest sign of health in the renewables market is smoke-clogged China, which in 2013 invested over $56 billion, more than all of Europe, as part of a hurried shift towards clean energy. China’s investment included 16GW of wind power and 13GW of solar. The renewable-power capacity China installed in that year was bigger than its new fossil-fuel and nuclear capacity put together.

The IEA (International Energy Agency) expects the cost of solar panels to halve in the next 20 years. By 2050, it predicts, solar will provide 16% of the world’s electric power, well up from the 11% it forecast in 2010.

So it is now remarkably cheap to generate renewable energy, but what about storing it? That relies on building better, and cheaper, batteries, and here The Economist's optimism is less well grounded in statistics. Instead it points to government subsidies (which can be and often are withdrawn at short notice) and promises by entrepreneurs such as Elon Musk to cut the cost of storing energy in batteries from US$250 per kWh to US$100.

All of this is of course excellent news for our warming planet, but the implications of a world in which “solar power will become so cheap that energy will no longer be seen as scarce” are more far-reaching even than that. What would a world of cheap, clean and limitless energy mean for our economies and societies?

This blog first appeared in the Lowy Interpreter here.