Forget North Korea or Russia: The Real Threat to America Is China 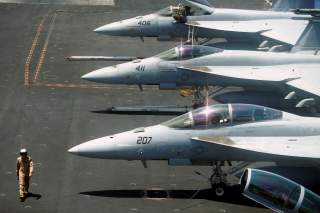 The strategic implications of China’s rising power have prompted ambivalent reactions from the U.S. and western democracies.  Unlike the quick coalescence on the containment strategy for the Soviet Union after World War II, there is still no real consensus on how the United States should deal with China in the 21st century.  Some see its ascension as aggressive and dangerous, calling for a firm balancing response led by the United States and its allies, but avoiding what Graham Allison calls Thucydides Trap, the war between an established and rising power.  Others on the spectrum are less certain, pondering whether strategic patience and positive diplomatic and business engagement is the answer, giving time for China to evolve into what many hope will ultimately be a comfortable fit with the free market global system.

The fact that China has already bypassed the United States as the world’s biggest economy according to IMF rankings for the past three years, and continues to grow its economy more than three times faster than the U.S., has yet to be fully absorbed strategically.  It is hard for many to believe that an authoritarian state is surpassing the United States in the 21st century as the world’s top economic power, with accompanying political, diplomatic and military power to follow.

Since the end of World War II, and particularly since the collapse of the Soviet Union, it has been an article of faith that the United States is the world’s preeminent power, in every domain, including economic, political and military. With China’s talented population four times larger than the U.S., its vast natural resources strategically positioned in Eurasia, and its unique adaptation of market economics, it has significant potential to shatter those long-held assumptions of U.S. national security strategy.

The United States will only be able to do so much to punch above its weight in any long-term economic competition with China.  Size matters.  A market economy of 1.4 billion educated people controlled by authoritarian values will have inevitable advantages over the United States with a population one quarter the size, no matter how talented and dynamic.

Instead of accepting these emerging realities, however, the reaction by many in the United States has been denial.   Some quibble over which statistical measures to believe.  The IMF GDP ranking is based on purchasing power parity, the measure favored by economists for comparing national economies as it tracks the purchasing power of each country using its own currency. These deniers point instead to nominal GDP figures which are based on market exchange rate conversion of local currency into U.S. dollars.  Under nominal GDP, the U.S. does remain technically number one for the moment, but given China’s rate of growth, the U.S. will be surpassed even under this less accurate measure by 2029, or earlier.

Others are total deniers, arguing that China will never reach economic parity with the United States.  They believe that China’s rapid growth is unsustainable, creating mountains of debt that will inevitably cause collapse.   Others outright deny China’s numbers, arguing that they cook the books with lies, with real GDP and growth less than what is officially reported.  Deniers also point to China’s diminishing labor supply, caused by low fertility rates and an aging population.  Another school of deniers even claims that the problem is not China, but rather the United States, itself.  Superior Chinese entrepreneurs, who are more open to bold risk and initiative, have outperformed the U.S.  The U.S. should not blame China but get its own house in order.

If the fundamental premises of any arguments put forward by deniers is correct, the United States should have nothing to worry about, time is on its side, particularly if the U.S. rebuilds its infrastructure and pursues successful domestic policies to strengthen its ability to meet China business competition.  Building a 21stcentury policy on such assumptions, however, is at best unwise.  If wrong, the U.S. will face the day when China is a unipolar, authoritarian hegemon.  The risk is too great.

Arguments by deniers also have substantive pitfalls.  Inevitable economic collapse is not a sure thing. The Chinese yuan is not freely convertible.   Western investors cannot swiftly convert the yuan into dollars as a correcting mechanism if they become uncomfortable with rising Chinese debt.   China, through its Communist Party, also has ironclad control over its population and press.  They will not challenge the Party’s debt creation policies.  With an extraordinarily high savings rate, quadruple that of the United States, the Chinese government can also take advantage of hundreds of billions of annual free cash flow, giving them far greater flexibility to finance debt.  Moreover, China can always play its ultimate card.  The government exercises total control over its banking system, enabling it to swiftly shuffle debt to equity as it has done when expedient in the past.

The very psychology of U.S. attitudes about China must change.  The core assumption that the United States has, and will always have the upper hand based ultimately on its economic power has to give way to a new reality.  Political, diplomatic and military power inevitably flows to a country that manages to double the size of its economy at least every decade, if not at its more recent pace of every five years.   The United States became the world’s largest economy, surpassing Great Britain, in 1822.   Over 100 years later, it is likely China’s turn to take over as number one.

The challenge for the United States is unprecedented.  Unlike the Soviet Bloc during the Cold War, China has not been isolated as a player in the global market.   It is a fully integrated partner in the WTO system, enjoying broad access to the Western economy, and reaping the wealth it creates for itself as the world’s largest trading nation.   Despite all the successes of the Soviet system in building military and diplomatic power, it never established itself as a major economic power. The Soviet Bloc’s economies were isolated from Western markets, and choked by Marxist Leninist doctrine, imposing state ownership on all business with pricing awkwardly set by central planners.  The Soviet Bloc economy was also limited by lack of access to advanced technology because of the COCOM export control system that was implemented by NATO allies at the start of the Cold War.

China has none of these limitations.  While the Communist Party ultimately controls its economy, it does not follow Marxist Leninism for its management. Chinese businesses are not all state-owned with prices dictated by central planners.  Instead, market forces are harnessed, but with the Communist Party deftly holding the reins; steering to promote the expansion of Chinese power and influence.  While designed to appear benign on the surface, the ultimate goal is a world system in which Chinese authoritarian values play a central if not the leading role.

Its advanced facial and voice recognition systems have been used to create the world’s largest domestic surveillance network and were used recently to locate and apprehend a BBC reporter in just seven minutes.

China seeks to avoid military confrontation with the United States, but mines the open market and global system to buy, hack or steal advanced Western technology.  China’s new stealth fighter jet, the J-20, bears an astonishing resemblance to the U.S. F-22 fighter, while China’s FC-31 Gyrfalcon in development looks like a knock-off of the U.S. F-35 fighter.   Earlier this year China sponsored in Xiamen a technology conference for international space planes and hypersonic systems.  Top American scientists were invited to participate and submitted papers, including, according to reports, one on  “A Review of Uncertainty Analysis for Hypersonic Inflatable Aerodynamic Decelerator Design.” Benefiting from such scientific exchanges, China is actively developing hypersonic weapons capable of penetrating missile defense systems and producing stealthier submarines.   Over three hundred thousand Chinese students are enrolled in American universities, many of them concentrating in scientific and engineering fields, gaining access to top American knowhow.  To allow such a number of Russian students a similar privilege during the Cold War would have been unthinkable.

The South China Morning Post has reported that Chinese scientists have been allowed to work for decades on advanced military projects in the Department of Energy’s National Laboratories.  Many have been lured back to China to work on its defense projects.  In fact, so many Chinese have returned to their home country from Las Alamos that they have been nicknamed the “Los Alamos Club.”

One example is Professor Chen Shiyi who was deputy director of the Los Alamos Center for Nonlinear Studies when he was recruited in 1999 to move back to China in 2001.  He became director of the State Key Laboratory at Beijing University.  There, he is believed to have been involved with developing a Chinese hypersonic glide vehicle that could reach speeds ten times the speed of sound.  Such vehicles could deliver nuclear warheads anywhere in the world at speeds which would be too fast for any current anti-missile defense system to counter.  Professor Shiyi is also believed to have been involved in designing a hypersonic wind tunnel testing system in China; the only tunnel of its kind known to exist outside the United States.  He is now leading China’s Southern University of Science and Technology whose aim is to become “China’s Stanford.”