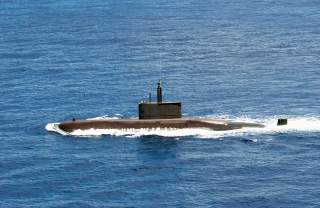 On August 2, Daewoo Shipbuilding & Marine Engineering, one of South Korea’s “big three” shipbuilders, announced it had handed over a modified version of Seoul’s Chang Bogo–class attack submarine to the Indonesian navy.

The boat is the first of three submarines South Korea is selling Indonesia under the terms of a $1.1 billion agreement the two countries signed in 2011. Daewoo beat out Russian, French and German companies in winning the contract, which was the largest-ever export contract for a South Korean defense company. The second submarine is currently undergoing testing in South Korea after being launched last year. It is expected to be delivered as soon as the end of 2017. The third boat will be license-built in Indonesia. Previously, South Korea had helped overhaul and repair Indonesian submarines.

In reporting on the sale, Yonhap News Agency claimed South Korea was just the fifth nation in the world to export a submarine, with the four other nations being Britain, France, Russia and Germany. However, the Swedish company Kockums has sold submarines to Australia and Singapore, although the latter deal was signed after the company was absorbed by Germany’s Howaldtswerke-Deutsche Werft (HDW). The United States only produces nuclear-powered submarines, which it refuses to export. At various times it has considered building diesel-electric submarines to export to countries like Egypt and Taiwan, but has never pulled the trigger. The United States has transferred submarine-propulsion technology to the United Kingdom.

Chang Bogo–class attack submarines are export versions of Germany’s Type 209 boats. Seoul first ordered three of the Type 209 class submarines from HDW in 1987. It later ordered six additional ones. All but the first of the nine vessels were built in South Korea, initially with HDW’s assistance.

The vessels displace 1,400 tons when submerged. According to Naval Technology, they have a single hull and “a length of 56 m, a beam of 6.2 m and a draft of 5.5 m.” In terms of weaponry, the Chang Bogo class boasts eight 533-millimeter tubes and fourteen Surface and Underwater Target (SUT) Mod 2 torpedoes, each of which has a range of twenty-eight kilometers. Some of them can also fire Harpoon antiship cruise missiles and all can hold mines instead of torpedoes. Their diesel-electric propulsion system enables them to cruise at a maximum speed of twenty-two knots when submerged. They can also travel for ten thousand nautical miles (11,500 miles) without making a port call.

Competition for submarine exports has been increasing markedly. In recent decades, the market has been dominated by France’s Direction des Constructions Navales Services (DCNS), Germany’s HDW and various Russian companies. The German and French companies have sold submarines to roughly twenty-one navies, while Russia has exported its own boats to fourteen countries, according to the Nuclear Threat Initiative.

Along with the six countries which have already sold submarines, companies in Italy, Spain, Japan, China and, to a lesser extent, Turkey are now competing to sell conventionally-powered submarines abroad. As Tom Waldwyn of IISS has noted, other countries like Pakistan, India and Brazil are currently building submarines for their own fleets under license agreements, and may seek to export them in the future just like South Korea did after obtaining the technology from Germany. A 2015 report by the Centre for Analysis of Strategies and Technologies, a Russian defense-industry think tank, stated that thirty-five submarines were then being built for export worldwide.

For Indonesia, the handover was a significant event as it is the first submarine the country has commissioned in roughly thirty-five years, when Jakarta purchased Type 209 submarines from Germany. Before this week, Indonesia’s navy only operated two Type 209 submarines, both of which are slated to be decommissioned in 2020. The country does, however, have a long history with undersea boats. Indeed, during the 1960s, Indonesia’s navy had twelve submarines.

Jakarta has similarly large ambitions for the future. The Defense Strategic Plan of 2024 called for Indonesia’s navy to acquire ten boats by 2024. That figure was later revised upwards, to twelve subs. Counting the three from the current deal with South Korea, at least the first six of these (not counting mini-subs) will be built with foreign technology. Indonesia’s Committee for Defense Industry Policy told local media last November that it is looking to sign a contract for three more foreign submarines, but has yet to decide on a supplier.

As is usually the case, the country faces no shortage of suitors. Along with South Korea’s Daewoo, France’s DCNS—which recently won a contract to build Australia’s submarines—has been seeking to entice Jakarta into buying its latest-generation Scorpene submarine. The Scorpene’s ability to operate in littoral waters is seen as a key selling point for Indonesia, along with France’s apparent willingness to transfer technology to Jakarta and build some of the vessels locally. Russia has also been trying to sell Indonesia its Varshavyanka-class diesel-electric submarines, and German and Turkish companies have been pitching Jakarta on Type 214 vessels. Indonesian officials have said they want to eventually build submarines indigenously, and the country is about to begin construction on a domestically built mini-submarine.

Indonesia’s submarines should get plenty of usage. As the world’s largest archipelagic country, the country has coastlines stretching 108,000 kilometers, and claims an exclusive economic zone of around 5.8 million square kilometers. It also sits along at least three major maritime shipping lanes: the Malacca, Sunda and Lombok Straits. In 2013, it also opened up a new submarine base at Palu Bay. At the time, Koh Swee Lean Collin, one of the sharpest analysts on Southeast Asian naval affairs, told me that Indonesia had selected Palu Bay for geographical reasons.

“It’s located first of all astride the Strait of Makassar and the Palu Bay is a narrow, deep inlet (reportedly 400m) which provides maximum security for the submarine force in terms of concealment and defense against attacks. Besides its sitting astride the strategic waterway, Palu offers direct access northwards into the Sulawesi Sea, where Indonesia still has outstanding dispute with Malaysia over the Ambalat offshore oil block,” he said.

More recently, Indonesia has announced that it will build another submarine base on Pulau Natuna Besar, one of the Natuna Islands in the South China Sea.