Forget the South China Sea: China's Great Game in the Arctic Draws Near 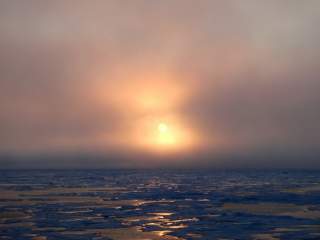 Twenty years from now China’s gaze will not focus upon the South China Sea or the Central Asian steppes to fuel economic growth. Instead, Beijing will look to a far more inhospitable place to satiate its appetite for natural resources. The vast, barren northern part of the planet called the Arctic Circle holds about 13% of the world’s undiscovered oil and 30% of its undiscovered natural gas. Greenland, sitting on the rim of the Arctic Circle, boasts of one of the world’s most abundant supplies of rare earths. By September of 2030, when many scientists believe the polar ice cap will have melted, the region may offer a bonanza for natural resources. By that time a new Great Game will have already enveloped the world’s most northernmost region. We can be sure that China will be eager to play.

Although it is the world’s second biggest economy, China depends on imports for many of the raw goods it needs to fuel its relentless pace of economic growth. In the coming decades, it will have to look for natural resources farther and farther away from the mainland if it is to continue on its current pace of development. This explains China’s recent moves into the South China Sea (SCS) and its interest in resource-rich Africa. But China still risks a catastrophic supply shock if war were ever to break out in the SCS since most of its trade passes through the Straits of Malacca. The Northern Sea Route (NSR) that passes through the Arctic Circle thus offers China an unprecedented opportunity to diversify its trade routes and tap into untouched natural resources. Furthermore, trade between China and Europe via the NSR will be faster and cheaper: the NSR shortens the distance between Rotterdam and Shanghai by some 3,000 miles and saves thousands of dollars on fuel. Some scenarios suggest that 5-15% of Chinese trade could pass through Arctic waters by 2020. It is no wonder that China has been making great efforts to improve its relationships with Arctic Circle states.

Yet despite all its advances into the region China is not an Arctic Circle state and it does not sit on the Arctic Council, which currently consists solely of Arctic Circle states. So far this has been to China’s benefit. As a neutral observer of the Arctic Council, China has avoided the kinds of disputes Russia has had with member states—like one that erupted when Russia planted its flag at the North Pole in 2007—that have hurt its influence on the council. China has stuck to its scientific and environmental projects to build credibility.

In fact, China is going to spend $60 million dollars a year on polar research at its new China-Nordic Arctic Research Center in Shanghai. A commitment to conducting rescue missions in the Arctic has also helped improve its image. But for all its efforts in science it is clear why China is in the Arctic: natural resources and trade. Strengthening bilateral relationships with Arctic Council members is, therefore, of paramount importance to Beijing. China prefers these types of relationships because it can bring its economic might to bear on smaller states separately. A new free-trade deal with Iceland and $500 million dollar currency-exchange support program for Icelandic banks are just the beginnings of this strategy. The more economically dependent these smaller states are on China the more likely they are to give Beijing a permanent seat on the Arctic Council, even if it is not an Arctic border state.

Recent world events also point in China’s favor as the Great Game in the Arctic becomes an ever more real phenomenon. It looks as if Russia will become isolated from the West as a result of the Ukraine crisis. This will have major implications for Russia’s position in the Arctic. As the new Sino-Russian gas deal shows, China is Russia’s most natural partner in the East when it comes to energy and large-scale trade. Russian companies, isolated from western partners, will have to turn to Beijing for money and assistance in the Arctic. Indeed, China National Petroleum Corporation already has made a deal with Rosneft, the Russian energy giant, for Arctic oil exploration. Joint deals like this one will be crucial if China is to access the region’s untapped oil reserves because most of the oil along the NSR is within Russia’s Exclusive Economic Zone. These trends will only continue as China’s energy needs grow.

The Great Game in the Arctic Circle is just beginning. For now, it will continue to be shaped by events far away from the polar ice cap. Soon that may change. The West should recognize China’s ambitions; the Far North may not remain cold forever.