Former Regime Official: North Korea May Not Last A Year Under Sanctions 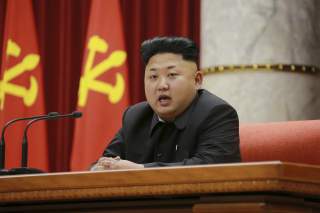 A former money man for the Kim regime suggests the North Korean economy is on the ropes.

“I don’t know if North Korea will survive a year [under] sanctions. Many people will die,” Ri Jong Ho, a former official in charge of securing funds for the regime, revealed at his first public speaking event in the U.S. at the Asia Society in New York, according to CNBC.

“There is not enough to eat there” and the sanctions have “completely blocked” trade, he asserted.

The U, at the urging of the U.S. and in response to North Korea’s test of an intercontinental ballistic missile and a staged thermonuclear bomb, has imposed strict sanctions on the rogue regime, cutting off 90 percent of its exports, restricting key imports, and shutting down illicit trading and smuggling networks. The U.S. has also imposed unilateral sanctions to increase the pressure on North Korea and its supporters.

“The sanctions that the White House has imposed on North Korea are of a historic level,” Ri explained. “Never before has the country faced such tough sanctions.” It is, despite his assessment, possible to hit North Korea even harder, but the regime is under significant pressure.

North Korea is developing weapons of mass destruction and the means to deliver them to distant shores, however, the rogue regime desires a functional relationship with the U.S., especially as ties with China hit “the very worst point of their relationship,” he stressed.

There is reportedly a great deal of distrust and contempt between Chinese President Xi Jinping and North Korean dictator Kim Jong-un. For China, North Korea has become a liability rather than a strategic asset stirring instability on China’s border, and North Korea is frustrated by Beijing’s willingness to put pressure on Pyongyang in concert with the U.S.

Kim called Xi a “son of a bitch” during a meeting with senior North Korean officials, Ri revealed.

It is unclear exactly what type of relationship North Korea desires with the U.S., but evidence suggests the North wants recognition as a nuclear-armed state and a peace treaty effectively ending America’s so-called “hostile policy” towards the regime. The North’s provocative behavior is, according to Ri, an attempt to force the U.S. to engage North Korea diplomatically on the regime’s terms.

The U.S. remains committed to a denuclearized Korean Peninsula, but North Korea reportedly does not want to talk until it has a demonstrated, reliable nuclear deterrence capability.

Ri served the Kim regime as a dedicated civil servant for more than 30 years before becoming disillusioned. He decided to flee the country with his family after Kim began purging senior officials by the hundreds.