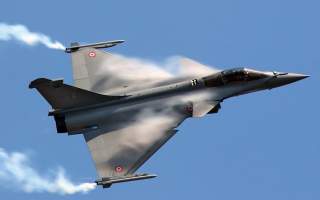 While the Armée de l'Air only brought six Rafales—three single seat models and three two-seat jets—to the exercise, elements of two fighter groups consisting of personnel from three squadrons travelled to the United States to participate in Atlantic Trident 17. According to Lt. Col. Yann Malard, the French detachment commander, the two-seat Rafale-B aircraft belonging to ¼ Squadron are based in Saint Dizier in northeastern France while the single-seat Rafale-C jets belong to 1/30 and 3/30 Squadrons based at Mont-de-Marsan in Southwestern France.

The goal of the Armée de l'Air for Atlantic Trident was to learn to operate together with the U.S. Air Force’s advanced fifth-generation fighters—and also the British Typhoons. “This is a unique opportunity to train together with all the fighters of the last generation—probably the best fighter aircraft in the world all together here at Langley Air Force base over three weeks,” Malard said. “It is all about teamwork. That’s basically what we are looking for over here.”

In France, Armée de l'Air squadrons train with other French aircraft, but there are only a few opportunities to train with fifth-generation stealth aircraft. Atlantic Trident helps France to learn—and vice versa—about the U.S. Air Force and RAF’s tactics, training and procedures, especially pertaining to the new generation of fifth-generation stealth aircraft that are now being fielded. “This exercise is not about how we don’t train anymore in Europe, it’s about how we train with the probably the best aircraft of the last gen of aircraft including the F-35 this year, which is new,” Malard said.

Each of type of aircraft—and each air force—at Atlantic Trident brings its own strengths to the fight. Training together allows the three allied air services to harmonize their skills—like a “symphony”—according to Malard. “We need to share all of our tactics and procedures to improve our level of proficiency,” Malard said.

In Europe, the Armée de l'Air primarily trains with its own aircraft and those of its European neighbors. Many of those countries—most of whom are part of the NATO alliance—fly advanced fourth generation aircraft. However, right now, there are no fifth-generation assets for France to train with that are stationed in Europe—either from the United States or a NATO partner.

“In Europe we train with a lot different Rafale units, with, for example in France, we use the Mirage 2000 units and Alpha Jet units, so that’s something we train very often,” Malard said. “We train with Typhoons as well, we train obviously with F-16s—for example, the Belgians have got the F-16s—we have the F-18 in Spain and Switzerland. So we train with a lot of different type of assets.”

But even at home, dispersed Armée de l'Air units in different regions of France don’t often train together as frequently as they would like. Moreover, the Armée de l'Air does not often train with the British RAF as frequently as either air arm might prefer, so large exercises like Atlantic Trident help to bring the allies closer together. Another major advantages for the Armée de l'Air when training in the United States is the availability of vast ranges to operate over compared to the much more congested skies over France and the rest of Europe. “It’s a huge airspace,” Malard said.

Ultimately, exercises such Atlantic Trident help to improve the proficiency and interoperability of all of the participants for when they go to war. “Everybody brings something to the fight,” Malard said.